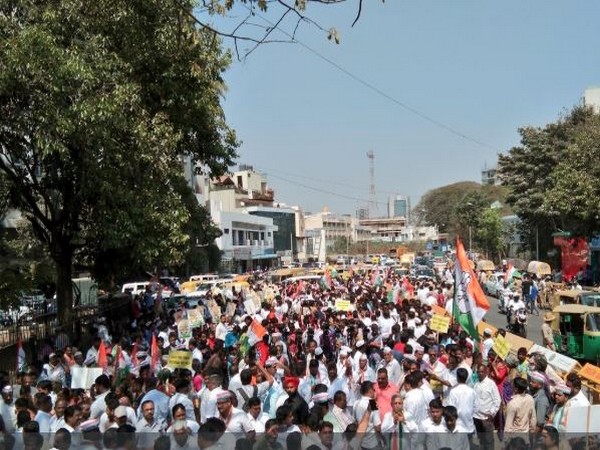 Bengaluru (Karnataka) [India], Feb 15 (ANI): Police on Saturday detained Congress leaders Dinesh Gundu Rao, Siddaramaiah, Rizwan Arshad, and K Suresh near Race Course Road here when they were trying to take out a protest march near the CM's office in protest against the arrest of two women.
Speaking to media, Dinesh Gundu Rao said: "Police are being misused by the government. Those who raise their voices against the Central government and the BJP are being booked for sedition."
One of the detained protesters said the BJP government has no courage to face them. "The BJP government is undermining democracy and subjugating the dissent. We are protesting to save the Constitution."
The bail has been granted to two women, who were arrested in connection with the Bidar school play case, in which a school was sealed allegedly after students performed a play against the Citizenship Amendment Act (CAA) and the National Register Citizens (NRC).
The school's principal and the mother of one of the students, who acted in the play had been booked under sedition charges after students staged the play during the Republic Day celebrations.
In the play, the participants were shown staging an anti-CAA sequence where there were dialogues encouraging non-cooperation with anyone asking for documents. A case was also registered against the school management. (ANI)