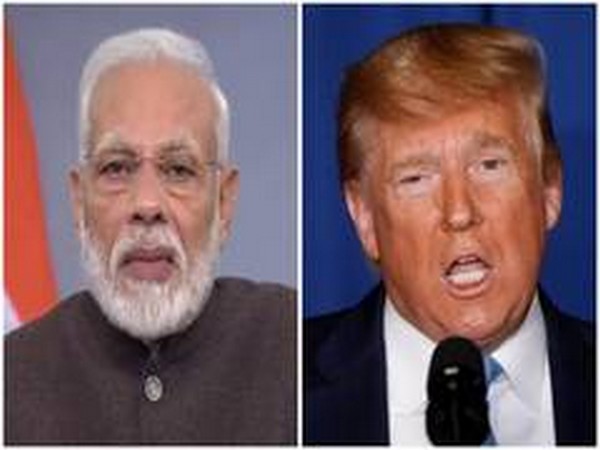 New Delhi [India], June 2 (ANI): Prime Minister Narendra Modi and President Donald Trump on Tuesday had a "'warm and productive conversation" over telephone during which they discussed a wide range of issues including the situation on India-China border with the US President inviting the PM for the next G7 meeting.
The Prime Minister said in a tweet that he had warm and productive conversation with his friend and the richness and depth of India-US consultations will remain an important pillar of the post-COVID global architecture.
A PMO release said that the "exceptional warmth and candour of the conversation reflected the special nature of the Indo-US ties, as well as the friendship and mutual esteem between both leaders".
It said President Trump conveyed his desire to expand the ambit of the grouping beyond the existing membership to include other important countries including India.
In this context, he extended an invitation to Prime Minister Modi to attend the next G-7 Summit to be held in the USA.
Prime Minister Modi commended President Trump for his "creative and far-sighted approach", acknowledging the fact that such an expanded forum would be in keeping with the emerging realities of the post-COVID world.
He said that India would be happy to work with the US and other countries to ensure the success of the proposed summit.
He also expressed concern regarding the ongoing civil disturbances in the US, and conveyed his best wishes for an early resolution of the situation.
The two leaders also exchanged views on other topical issues such as the COVID-19 situation in the two countries, the situation on the India-China border, and the need for reforms in the World Health Organisation.
The conversation took place amid a stand-off between Indian and Chinese troops in Eastern Ladakh after a skirmish last month in Sikkim.
This is the first interaction between the two leaders since the US President offered to mediate in the "raging border dispute" between India and China. Both India and China later said they were engaged to resolve the border issue.
The call between Trump and Prime Minister Modi comes at a time during protests in parts of the US after the death of a black man in police detention.
President Trump warmly recalled his visit to India in February this year. Prime Minister Modi said that the visit had been memorable and historic on many accounts, and had also added new dynamism to the bilateral relationship, the release said
In his tweet, the Prime Minister said they discussed his plans for the US Presidency of G-7.
"Had a warm and productive conversation with my friend President @real DonaldTrump. We discussed his plans for the US Presidency of G-7, the COVID-19 pandemic, and many other issues. The richness and depth of India-US consultations will remain an important pillar of the post-COVID global architecture," he said. (ANI)