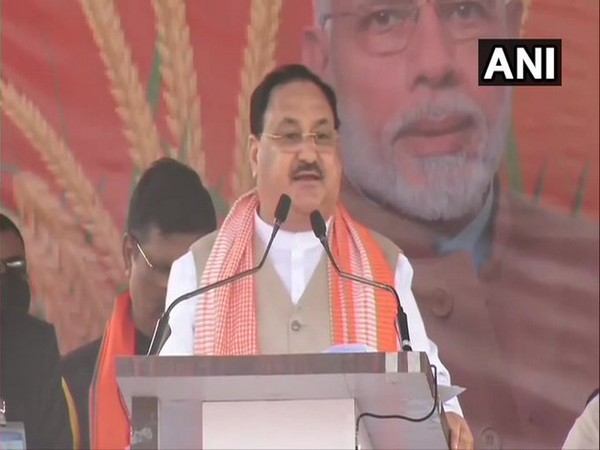 Purba Bardhaman (West Bengal) [India], January 9 (ANI): Exuding confidence of emerging victorious in the upcoming Assembly election in West Bengal, Bharatiya Janata Party (BJP) President JP Nadda on Saturday said the people would show the door to Trinamool Congress (TMC) government in the polls.
Addressing a public rally at Jagadanandapur village ground, Nadda said, "The warmth with which you welcomed me and your huge presence clearly shows that you have decided for the exit of Mamata and entry of BJP (in the state). We will form the government in West Bengal and work for the welfare of the farmers here."
The BJP President further slammed TMC for allegedly indulging in corruption and scams. "There are so many scams in this government. Corruption is rampant. 'Cut money'(commission) is demanded even for funerals. Now the new prince (Abhishek Banerjee) has started collecting money," he claimed.
Nadda has launched Krishak Suraksha campaign for BJP's outreach to farmers of Bengal. ''Today I have started 'Krishak Suraksha Abhiyan' and received a handful of rice given by farmers. I am going to take donations from them even in the village. Starting from today, our workers will take a handful of grain from farmers and pledge for fighting their (farmers') struggle," stated Nadda.
The BJP president hailed Prime Minister Narendra Modi citing his efforts to improve the lives of farmers. "Ever since Modiji became the prime minister, the Central Government has increased the budget for agriculture six times. During UPA government, the agricultural budget was of Rs 22,000 crore. Modiji has increased it to Rs 1,34,000 crore," added Nadda.
After the rally, JP Nadda had lunch along with Bengal BJP President Dilip Ghosh at a farmer's house in Jagadanandapur.
Earlier the day, BJP president had offered prayers at Radha Govind Temple near Katwa in Purba Bardhaman. (ANI)