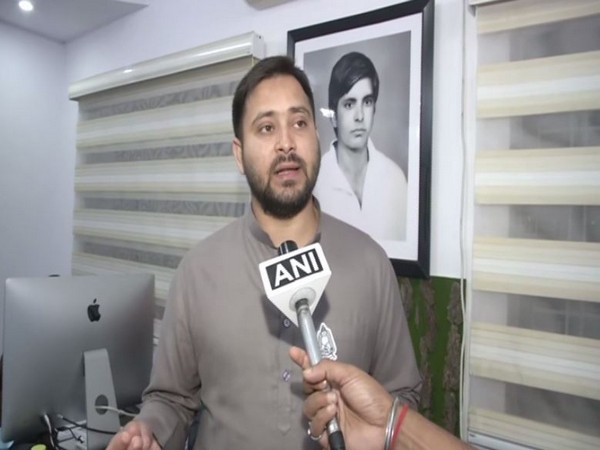 Patna (Bihar) [India], October 28 (ANI): Prior to the start of the first phase of Bihar elections, Rashtriya Janata Dal (RJD) leader Tejashwi Yadav on Wednesday said that people should vote to ring in a change in this election.
"Elections are democracy's festivals. The first phase of the election is going to begin in some time. I want to say to the people of Bihar to use their vote to ring in a change in this election," Tejashwi Yadav told ANI.
"For 15 years, the incumbent government kept the youth unemployed, worsened the situation of farmers and labourers. They were not able to establish one industry in the state. Poverty was not removed and the situation of education and healthcare worsened in the state," he added.
Tejashwi Yadav said that the biggest issue in this election is unemployment.
"The biggest issue in this Bihar election is unemployment. Nitish Ji has just ignored the problems of flood, Japanese encephalitis and other problems of the people. I would appeal to the first time voters to vote for a glorious future," he said.
The RJD leader said that Chief Minister Nitish Kumar's statements are not important and they show that he is in distress.
"One can witness the statements made by Nitish Kumar in the last 15 years. Whatever he says about me and my family is like a blessing," he said.
"Nitish Ji's statements are not an issue. People did not expect him to stoop to such a low level. The political analysts are of the view that Nitish Kumar is in distress and is on his way out," he added.
He further said, "We will be surely successful because we are standing with the public against the government. I am going to conduct 15 rallies today. This time people are voting on the issues of development and not on caste. We will surely form the government and NDA is on its way out."
The Bihar elections will be held in three phases -- October 28, November 3 and November 7-- and the counting of votes will be done on November 10. (ANI)