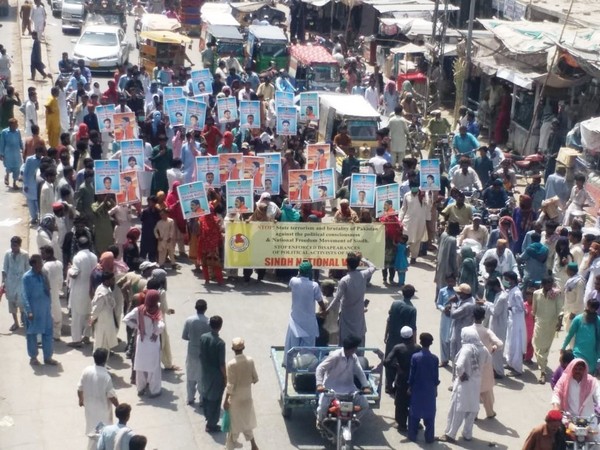 Qazi Ahmed [Pakistan], July 30 (ANI): A massive protest erupts in Qazi Ahmed town of Shaheed Behazir Abad district of Sindh province as people defy state terrorism amid the rise in enforced disappearances incidents.
The protesters shouted slogans saying "Stop state terrorism, fascism and brutality in Sindh" and they were holding banners demanding stop enforced disappearances of political activists in Sindh.
A large number of protesters include women and children, who have their family members missing for months and years.
Sindh National Voice shared a long list of missing persons including Nawab Mahr, Aslam Maheri, Aijaz Gaho and Hafeez Pirzado.
Many of these political activists belong to Jeay Sindh Muttahida Mahaz (JSMM), a separatist political party that believes in the separation of Sindhudesh from Pakistan.
The Chairman of JSMM, Shafi Burfat who is living in exile in Germany told ANI, "The rally was organised for the safe release of political activists abducted by Pakistan's ISI and Army. Seven protesters were picked by the secret agencies during the rally".
Protests are continuing in different parts of Sindh province as people have been facing brutality in the hands of security forces. A large number of political activists, journalists and other intellectuals are missing, who are allegedly abducted by secret agencies and kept in isolated detention centres.
Sindh is a resource-rich province of Pakistan, but the people are facing immense poverty and unemployment.
A majority of people here demand freedom from Pakistan which led to efforts by security agencies to silence the voice of dissent. (ANI)