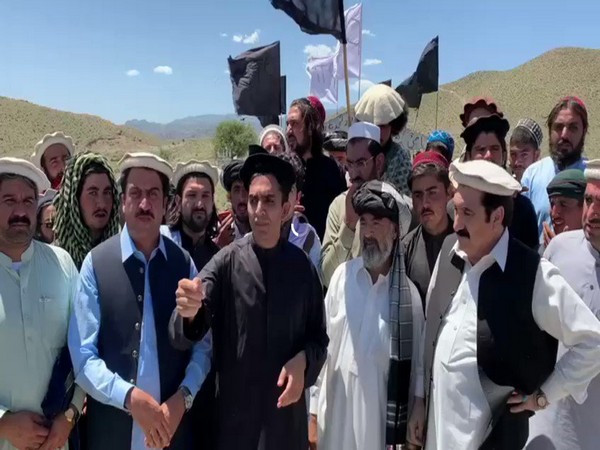 North Waziristan [Pakistan], May 27 (ANI): Amid COVID-19 pandemic, central leaders of Pashtun Tahafuz Movement (PTM) including Member of National Assembly Mohsin Javed Dawar visited the graves of Kharqamar martyrs on Tuesday to mark the first anniversary of the barbaric incident in which 14 peaceful Pashtun protesters were killed by the Pakistan army.
On May 26 last year, PTM activists were holding protests near Kharqamar check post in the Datta Khel Subdivision of North Waziristan, when the military fired upon the gathering and killed over a dozen protesters.
Several PTM activists including the Members of National Assembly (MNAs) Ali Wazir and Mohsin Dawar were arrested by the security forces after the incident and the curfew was imposed in the area.
Many Pashtun human rights and political activists condemned the incident on social media.
Mir Kalam Wazir, Member of Provincial Assembly, North Waziristan tweeted, "Due to crisis of COVID-19, we suspended the execution of grand gathering for Khar Qamar massacres. However, along with MNA @mjdawar and many other comrades, we laid wreath over the cemetery of Khar Qamar's martyred and shared the grieves of their family."
Ihtesham Afghan, a human rights activist, tweeted: "The whole state is responsible for #KharQamar incident. Pakistani media also played the role of a killer. The judiciary also remained silent on this issue, which has made our hearts broken."
Abubakar Siddique, a journalist and author of The Pashtun Question, said that a year after the killing of civilians in Kharqamar, there is still no transparent probe of the incident.
SAATH Forum, which stands for South Asians Against Terrorism and Human Rights, said in a statement: "A year after Kharqamar massacre, there is still no accountability over the alleged state-sanctioned killing of innocent Pashtuns, many belonging to PTM."
SAATH Forum demanded that an independent commission be set up to investigate this massacre and the cover-up.
It added: "The Kharqamar massacre happened just a few weeks after a press conference by the then Director-General of military's media wing ISPR, General Asif Ghafoor, who threatened the PTM with dire consequences in this media talk."
Pashtun Tahafuz Movement is a peaceful resistance movement started in May 2014 in Pashtun dominated areas of Pakistan, which demands the removal of landmines, stop extrajudicial killings and other human rights violations by the Pakistan Army.
The movement has gained support from neighbouring Afghanistan, which has a large Pashtun population. (ANI)