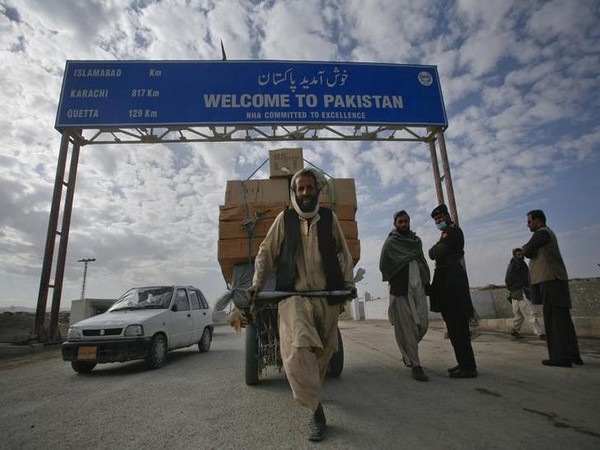 Islamabad [Pakistan], May 16 (ANI): Pakistan has decided to open its border crossings with Afghanistan round the clock for six days in a week to facilitate cross-border trade, which has been affected due to the COVID-19 in both countries.
The National Command and Operation Center, a high-level body leading the country's fight against the coronavirus outbreak, took the decision of opening the Torkham and Chaman crossings with Afghanistan in Khyber Pakhtunkhwa and Balochistan provinces, Radio Pakistan reported quoting a notification issued on Friday by the country's interior ministry.
The Torkham border will remain open for 24 hours a day and six days a week (except Saturday) for cross-border trade and an unlimited number of trucks will be allowed per day while ensuring proper standard operating procedures (SOPs) and guidelines for both the bilateral trade and Afghan transit trade, the reports said, adding that similar directives were also issued for the Chaman border.
The notification also said that Saturdays will be reserved for pedestrian move only and the SOPs as applicable for air passengers will be implemented for pedestrians as well.
Pakistan had closed the border with Afghanistan, but announced in April to open the two border crossing points thrice a week to facilitate cargo trucks and containers to enter Afghanistan. However, Afghan traders say that thousands of their containers of transit goods are stuck at the Karachi port, causing them financial losses.
Pakistani and Afghan traders welcomed the newest decision and hoped that it will ensure smooth cross-border trade activities.
A traders' body in Khyber Pakhtunkhwa also hailed the decision and said it will ensure speedy clearance of containers, besides removal of hurdles to bilateral trade and transit trade between Pakistan and Afghanistan, Xinhua news agency reported.
Ziaul Haq Sarhadi, President of the Frontier Customs Agents Association, Khyber Pakhtunkhwa, said the opening of Torkham border for six days and round the clock for cross-border trade will remove obstacles in the way of Pakistan-Afghanistan trade and transit trade and will give a further boost to mutual trade volume between the two neighbouring countries.
Pakistan and Afghanistan had signed a transit trade agreement in 1965 that was revised in 2010. Afghan traders have also been allowed to import goods via the Gwadar port in Balochistan province, besides using ports in Karachi, the commercial hub of Pakistan. (ANI)