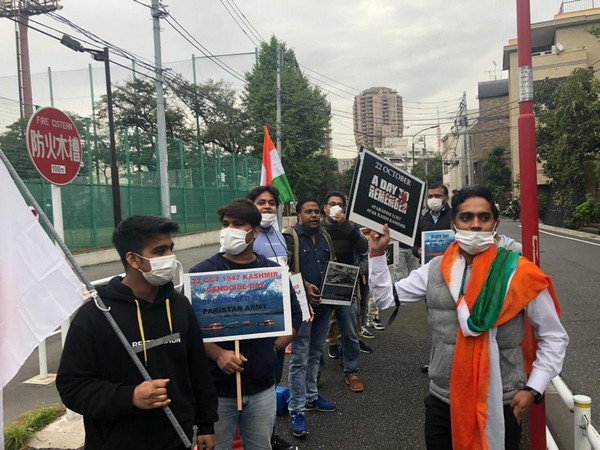 New Delhi [India], October 24 (ANI): Pakistan invaded Kashmir on October 22, 1947, and brought in its wake horrifying stories of mass plunder and vandalism, killing thousands of men, women, and children mercilessly, said Dr Ashok Bhan.
He made these remarks during a webinar titled "Pakistan Army's Game Plan in J&K: India's Response," which was organised by Kashmir (Policy and Strategy) Group.
The event was held to mark the anniversary of Pakistan's invasion of J-K, where Dr Bhan recalled how on October 26, 1947, "Maharaja Hari Singh signed the instrument of accession and acceded the state to India. Following the accession, troops were airlifted to Srinagar to repel the tribal invasion."
He added that 1947 was in fact the beginning of first Indo-Pak war. Camouflaged as a tribal invasion, it was supported by the regular Pakistan army troops. He said the consequences of these watershed events are still affecting the country and that the conflict is still present.
Speaking on the subject, Lt. Gen. GS Katoch (Retd.) referred to Brig. Rajinder Singh's efforts to fight against the tribals. He made a mention of the valiant fight made by the fighters against the tribals. He also referred to the scattered attacks of Pak Army and also the vicious communal propaganda spread in the state.
While condemning the invasion of J&K in 1947, Prof. Javed Kakroo said that there are stories too of saving the lives of other communities and local Muslims. He added that despite being a Muslim majority state, J&K acceded to India.
European Foundation for South Asian Studies (EFSAS), in a recent commentary, called October 22 as the "darkest day" in the history of Jammu and Kashmir when Operation Gulmarg was launched in a bid to seize the territory. According to a European think tank, the tribal invasion had left between 35,000 and 40,000 residents dead.
"The planners and perpetrators of the tribal invasion were, and remain, without doubt, the foremost enemies of the Kashmiri people. The day the invasion began on October 22, 1947, has to be the darkest day in the history of Jammu and Kashmir," the European think tank said. (ANI)