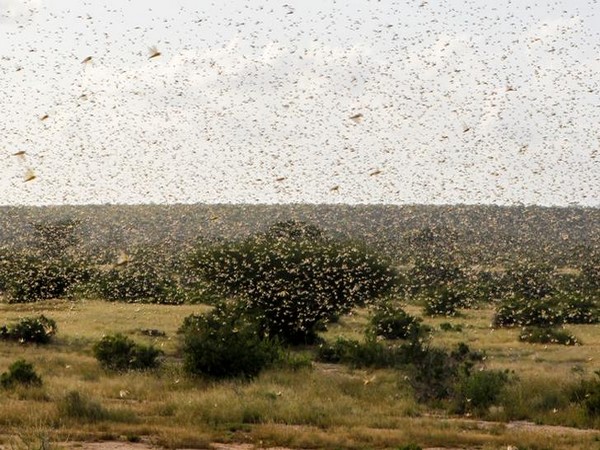 Islamabad [Pakistan], Feb 3 (ANI): The Pakistan government has declared a national emergency to combat swarms of desert locusts destroying crops on a large scale in the eastern province of Punjab, local media reported.
The decision was taken on Friday during a meeting convened by Prime Minister Imran Khan at his office. The meeting, which was attended by federal ministers and senior officials of the four provinces also approved a national action plan (NAP) that requires a sum of PKR 7.3 billion to overcome the crisis, Dawn reported.
During the meeting, Khan ordered the formation of a high-level committee to be headed by Khusro Bakhtiar to take decisions at the federal level for the elimination of locust swarms. He also directed the authorities concerned to take immediate measures on the basis of damage of ripened crops.
"Protection of farms and farmers is the highest priority of the government. Therefore, the federal government should take all necessary steps to save national crops and provide required resources to the quarters concerned," Khan said during the meeting.
The desert locusts arrived in Pakistan from Iran last year and have since destroyed corps on a large scale in the provinces of Sindh and Punjab, raising fears of food insecurity in the country. (ANI)

One thought on “Pak declares national emergency to combat locusts”