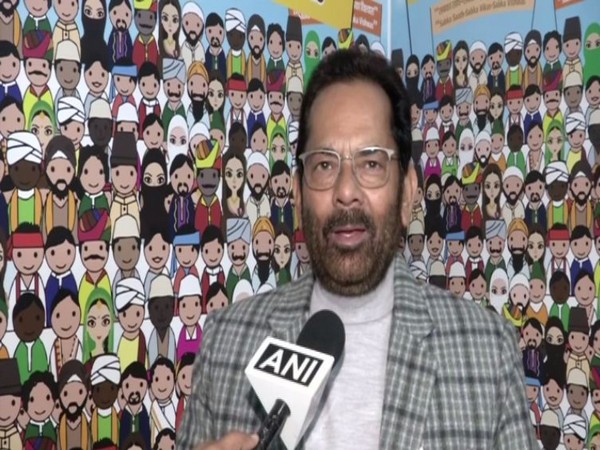 New Delhi [India], Feb 21 (ANI): Union Minister and Bharatiya Janta Party leader Mukhtar Abbas Naqvi on Friday said that All India Majlis-e-Ittehad-ul-Muslimeen Chief Asaduddin Owaisi has sowed poison and is reaping vitriolic yields.
Reacting on the pro-Pakistan slogans allegedly raised by a student at an anti-CAA rally in Bengaluru heralded by AIMIM chief Owaisi, Naqvi told ANI: "Asaduddin Owaisi has sowed poison so he is reaping vitriolic yields. The raising of 'Pakistan zindabad' slogan is unacceptable."
"AIMIM leaders like Waris Pathan are instigating and misleading people to remain in relevance," he added.
A student named Amulya allegedly raised 'Pakistan zindabad' slogan at an anti-CAA rally organised by AIMIM chief Owaisi in Bengaluru on Thursday. A case has been registered under Section 124A (Offence of sedition) of the Indian Penal Code against Amulya.
Meanwhile, on the ongoing protests at Shaheen Bagh, Naqvi further said that the Supreme Court has sent interlocutors to hold talks with protestors and find a solution to the issue.
The BJP leader took a dig at the Congress party's problems by saying that the Congress journey is limited to the Gandhi family.
"If any person raises the issue of family politics in Congress then he becomes a villain for Congress," he said.
Earlier, Congress leader Sandeep Dikshit had remarked that the biggest challenge the party faces is the "leadership question". (ANI)