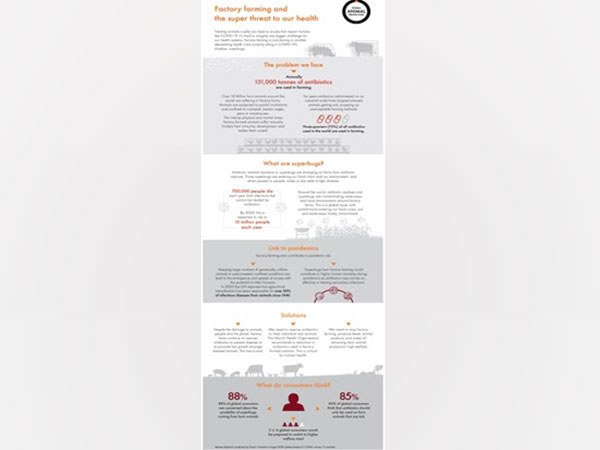 New Delhi [India], October 16 (ANI/NewsVoir): On the occasion of World Food Day, International animal welfare organisation, World Animal Protection has released a report, which finds that superbugs are emerging on farms from antibiotic overuse, and those antibiotic resistant bacteria are entering our food chain and our environment.
With factory farming routinely giving farm animals the same antibiotics used to treat up to 100 per cent of critically ill COVID-19 patients in the early stage of the pandemic the rise of superbugs from factory farming presents a real and present danger to global public health.
A public poll, also from World Animal Protection, shows that 52 per cent Indians are deeply concerned that the next pandemic could come from farm animals. Globally, 4 out of 5 people, surveyed across 15 countries for the poll, had similar concerns. Over 15,000 people were surveyed for the poll and most were also unaware of the superbug threat from factory farming.
"This report and the poll are clear reminders of the growing risks of giving antibiotics to farm animals. Using these antibiotics on animals has severe repercussions on the health of the animals and eventually on the health of the people who end up consuming them. We urge consumers to demand better from the fast food restaurants they eat at and ensure better treatment of animals in factory farms," said Gajender K Sharma, Country Director, World Animal Protection India.
Almost three-quarters of the world's antibiotics are used in animals, the majority on factory farms with antibiotics used to prop-up low-welfare practices such as the raising of fast-growing meat chickens.
These animals are all housed in stressful, cramped conditions that provide the perfect breeding ground for the spread of infection and emergence of disease.
This is a risky business - when superbugs are passed from animals to people, they make us less able to fight disease. Already, 700,000 people die each year from infections that cannot be treated by antibiotics. By 2050, this is expected to rise to 10 million people each year.
If the pandemic is the flash flood that has taken us by surprise, the superbug crisis is the only too predictable slow rising tide. We can't ignore the contribution that the overuse of antibiotics in factory farming is having on the rise in antibiotic resistance - it is a ticking timebomb that could make the current public health crisis even worse if antibiotics are ineffective in treating secondary infections, said Jacqueline Mills, Head of Farming, World Animal Protection.
"Governments need to lift animal welfare standards, and monitor and report on antibiotic use in farm animals and international fast food restaurants should be setting the bar far higher to ensure the animals in their supply chains are treated well, and antibiotics are used responsibly in farming," Mills added.
"Industrial animal farming is tearing down our forests, polluting our water, warming the planet and harming our health. We must end industrial animal farming and its unacceptable dependence on antibiotics, drastically reduce how much meat we produce and eat, and transition to a just and ecological food system," said Monique Mikhail, Senior Strategist, Greenpeace International.
Key findings of the global poll conducted by World Animal Protection with consumers in 15 countries:

World Animal Protection is calling for the end of factory farming, reduced production and consumption of farm animal products and for all remaining farm animal production to be high welfare.
This story is provided by NewsVoir. ANI will not be responsible in any way for the content of this article. (ANI/NewsVoir)