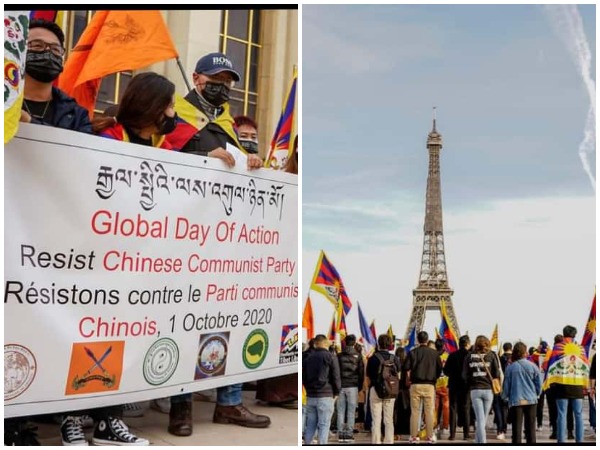 Paris [France], October 3 (ANI): More than 300 people belonging to several groups gathered at the Trocadero square near the Eiffel Tower in Paris to protest against the human rights violations in China and join the global resistance against the Chinese Communist Party.
The protesters belonging to multiple groups including Tibetan associations, the Uyghur Association of France, South Mongolians, Falange Gong, Hong Kong dissidents and Taiwanese gathered at the Trocadero square on October 1 to give a clarion call to the global leaders to resist China.
Each group carried banners and flags representing their group and raised slogans against China. Leaders of the various groups called on the international community to support their struggle against China.
Protestors carried "Free Hong Kong" placards and many wore masks with "Free Tibet" on printed on them. The protest, which lasted more than three hours ended with all protestors lighting up the Paris night with their mobile phone torches and singing "We shall overcome".
The Inter-Parliamentary Alliance on China also lent its support to the protest.
Meanwhile, a similar kind of protest was held in Japan against the Chinese Communist Party.
These protests come on the occasion of the 71st National Day of the People's Republic of China. (ANI)

Ind vs Aus: Got 10 minutes, did not have any pressure, says Chahal

Lampard wants to stay at Chelsea beyond current contract