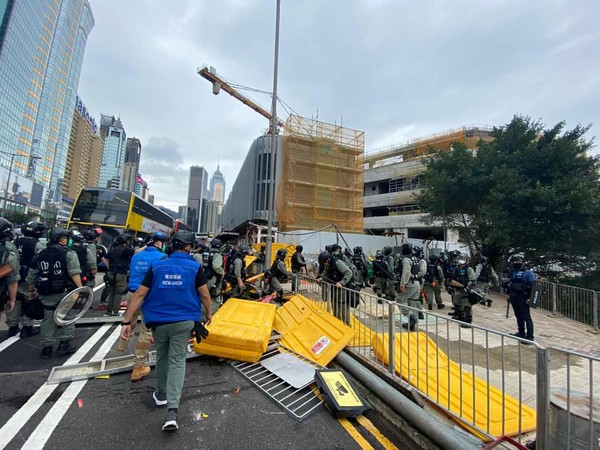 Hong Kong, May 24 (ANI): At least 120 people were arrested by the Hong Kong Police on Sunday in Causeway Bay and Wan Chai areas during protests against the national security law proposed by China.
"...At least 120 people had been arrested, mostly for unlawful assembly," the Hong Kong Police wrote on Facebook in Mandarin.
"A large number of 'thugs' have carried out illegal violence in Causeway Bay and Wan Chai (districts) under the name of demonstrations. The thugs not only stormed into the road where vehicles were still travelling but also set fire to debris," police added.
At the annual National People's Congress (NPC), China's ruling Communist Party on Friday proposed the controversial legislation. The NPC is expected to vote on the bill at the end of the annual session, which is likely to wrap up on May 28.
Earlier today, Chinese Foreign Minister Wang Yi said that the issue of Hong Kong's security needs to be resolved without any delay, referring to the newly proposed national security legislation for the semi-autonomous city.
"All this put the state security at serious risk, and also became a threat to the prosperity of Hong Kong and the implementation of the 'one country, two systems' principle," Wang said during a press briefing.
Violent protests engulfed Hong Kong last year, starting in June. Numerous demonstrators took to the streets to protest a proposed extradition bill, but later, the unpopular measure was withdrawn in October. (ANI)