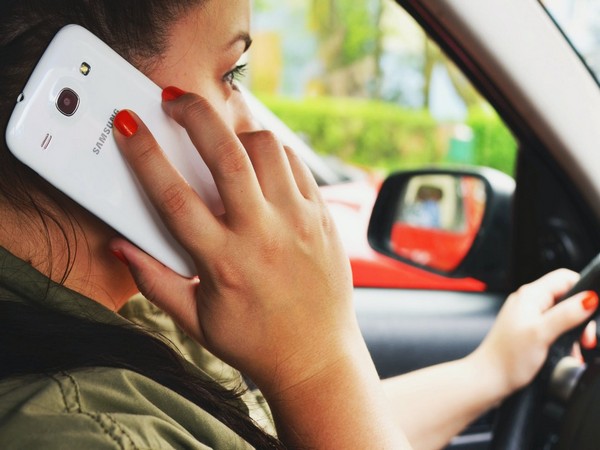 Washington [US], February 23 (ANI): Young novice drivers who talk on hand-held smartphones while driving are also likely to drive while under the influence of drink or drugs, according to researchers at Lero, the Science Foundation Ireland Research Centre for Software.
The study "Smartphone Use While Driving: An Investigation of Young Novice Driver (YND) Behaviour," also found that speaking on a hand-held phone is strongly correlated with high-risk driving behaviours such as overtaking on the inside of the car ahead, speeding, driving without a valid license and driving while intoxicated.
Lero researchers, surveyed 700 German Young Novice Drivers (YNDs), with an average age of just over 21. While the data relates to Germany, it may point to young drivers' risky driving behaviour in other motorised countries, enabling road safety authorities to target information campaigns designed for younger drivers, the authors believe.
Dr Darren Shannon of Lero and University of Limerick said car crashes are the leading cause of death for those between the ages of 15-29, according to the World Health Organisation, with smartphone use acting as a significant contributory factor.
"The data also indicates a moderately-strong effect between talking on a hand-held phone and speeding more than 20 km/h over the speed limit in urban areas. Speeding in built-up areas is moderately correlated with reading notifications, sending texts, or voice messages," said Shannon.
"There is a strong association between those who speak on their phone and those who engage in risky activity with potentially fatal consequences, such as intoxicated driving, ignoring red traffic lights, and driving with more passengers than seatbelts," added Dr Shannon, a specialised vehicle collision researcher with the Emerging Risk Group (ERG), Kemmy Business School, UL.
Lero's Dr Martin Mullins said the work carried out by the team points to the prevalence of certain attitudes in young people who drive while using mobile phones. In Germany, for example, the research shows that a sizeable number of novice motorists deliberately disobey the law by hiding their phones while driving.
"These attitudes have implications for the safety of other road users. Our work allows for road safety authorities to accurately target information campaigns designed for younger drivers. Targeted campaigns should increase awareness that all smartphone-related activities can significantly increase the risk of a crash or near-crash event," said Mullins.
"We don't just see policymakers as responsible. Carmakers are making their cars seem like a place of entertainment. This may have induced a false perception that behaviours like changing the music while driving are perceived as safe, and should instead engage in efforts to reduce this type of behaviour," added Dr Mullins, Co-Leader of the ERG at UL.
Lero researcher and PhD student Tim Jannusch of Institute for Insurance Studies of TH Koln said that the overall high percentage of Young Novice Drivers using their phone for music-related activities may suggest that they might perceive music-related activities as less dangerous.
"This could be attributed to the fact that drivers are allowed to use the car stereo while driving, which implies that changing or searching for music is safe. Nevertheless, changing music while driving, like reading or writing text messages, can cause cognitive, visual, and physical distraction and significantly increase the risk for road traffic collisions," said Jannusch.
Dr Shannon said policymakers could use their results for public information policy development, and to tailor financial penalties for those engaging in smartphone behaviour linked to dangerous driving. "Our findings can also be used in a Usage-based Insurance (UBI) context to financially incentivise safer driving," he added. (ANI)