Skip to content
Home  »  Sports   »   Not going to be normal bilateral series: Jason Holder on Tests against England 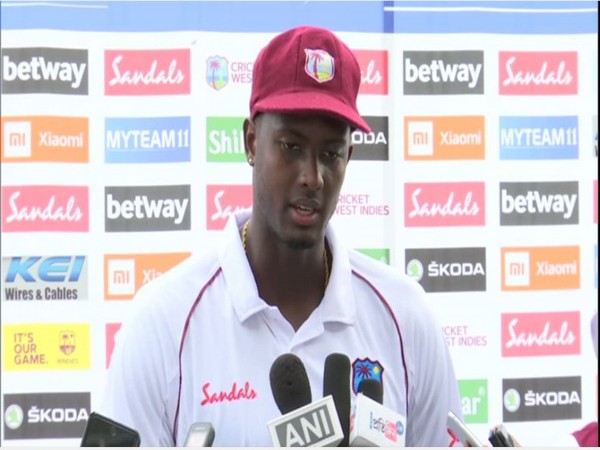 Manchester [UK], June 11 (ANI): Ahead of the three-match Test series against England, West Indies skipper Jason Holder has said that the matches would not be normal bilateral action as it would be played under different circumstances.
All international cricket has been suspended since March due to the coronavirus pandemic, but the three-Test series between England-West Indies will mark the return of international cricket.
"It's not going to be a normal bilateral series here in England. But at the end of the day this is where we are with the state of world cricket - the state of the world, per se. No doubt it will be different. But we just have to get on with it and try to make the most of the circumstances in these trying times," ESPNCricinfo quoted Holder as saying.
Holder also said that the entire Windies side is highly motivated for the series against England and is looking forward to giving their best.
"West Indians are fuelled and motivated in different ways. In the previous series, particularly against England, people have said things prior to the series beginning, and that has fuelled a lot of things within us as West Indians," Holder said.
"Who knows, this could be something serious we could build on and we could get some real positive energy through the group. Only after we sit down and discuss and get a common sense of where everybody's mind is at, will we then formulate our plans," he added.
Darren Bravo, Shimron Hetmyer, and Keemo Paul have refused to tour England for the three-Test series, and CWI has said that the body respects their decision and will not hold it against them while considering the future selection.
The proposed dates for three Tests are:
First Test: July 8-12 at Ageas Bowl
Second Test: July 16-20 at Emirates Old Trafford
Third Test: July 24-28 at Emirates Old Trafford
The West Indies squad will live, train and play in a 'bio-secure' environment during the seven weeks of the tour, as part of the comprehensive medical and operations plans to ensure player and staff safety.
The bio-secure protocols will restrict movement in and out of the venues. So the selection panel has also named a list of reserve players, who will travel to train and help prepare the Test squad and ensure replacements are available in case of any injury.
The ICC has also confirmed interim changes to its playing regulations, which include the ban of saliva to shine the ball and allowing replacement of players displaying symptoms of COVID-19 during a Test match.
"Players will not be permitted to use saliva to shine the ball. If a player does apply saliva to the ball, the umpires will manage the situation with some leniency during an initial period of adjustment for the players, but subsequent instances will result in the team receiving a warning," ICC said in a statement.
"A team can be issued up to two warnings per innings but repeated use of saliva on the ball will result in a 5-run penalty to the batting side. Whenever saliva is applied to the ball, the umpires will be instructed to clean the ball before play recommences," the statement added.
Also, the requirement to appoint neutral match officials will be temporarily removed from the playing conditions for all international formats owing to the current logistical challenges with international travel. (ANI)

2 thoughts on “Not going to be normal bilateral series: Jason Holder on Tests against England”