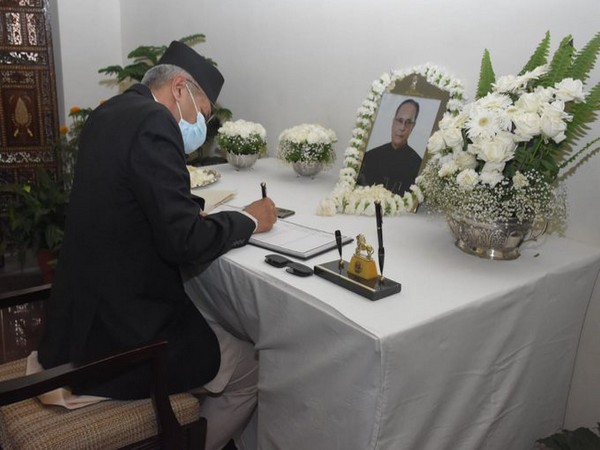 Kathmandu [Nepal], September 4 (ANI): Nepal Foreign Minister Pradeep Gyawali on Friday paid his respects to former Indian President Pranab Mukherjee and signed the condolence book on behalf of the Nepal government.
"Nepal Foreign Minister Pradeep K Gyawali went to Embassy of India in Kathmandu today and signed the book of condolences on behalf of the government and people of Nepal on the sad demise of former President of India Pranab Mukherjee," the Nepal Foreign Ministry said in a tweet.
Mukherjee, who had tested positive for coronavirus, breathed his last on Monday, weeks after his brain surgery. He was 84.
In his long political career, he held several top posts including that of External Affairs Minister, Defence Minister and Finance Minister.
The former President was cremated with full state honours on Tuesday.
Several leaders in India and across the world expressed grief over the demise of Mukherjee.
The Government of India has announced seven-day official mourning. (ANI)