Skip to content
Home  »  Sports   »   NBA: Lakers one game away from championship win 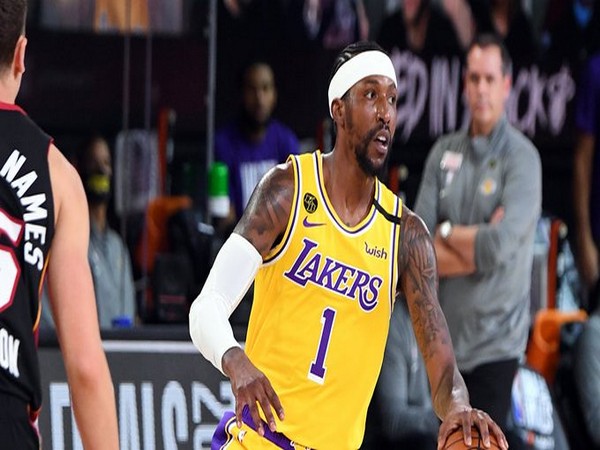 Los Angeles [US], October 7 (ANI): After facing a loss in Game 3, Los Angeles' Lakers star duo LeBron James (28p, 8a, 12r) and Anthony Davis (22p, 4a, 9r) helped their team to reach one step closer to the championship win with a 102-96 victory over Miami Heat.
The Lakers, who lead 3-1 in the series, are now just one win away from their record-equalling 17th NBA title. James, who got off to a slow start, but picked up the pace with 20 points in the second half, had sent a text to his teammates before the game to let them know the kind of zone he was in.
"When I woke up from my nap this morning after our team meeting, I just felt that. I felt that vibe. I felt that pressure. I felt like for me personally, this was one of the biggest games of my career. I just wanted to relay that message to my teammates," said James after the win.
The Lakers drew first blood when they inched ahead at 27-22 at the end of the first quarter, however, the Heat fought back and took the lead at 33-39 in the second quarter as Butler moved into double figures.
Nevertheless, the Heat couldn't hold onto their lead as the Lakers took a two-point lead at the end of the first half. As James and Davis improved their shooting from distance in the second half, the Lakers closed out the game comfortably.
The Lakers head coach Frank Vogel expressed that the way James and Davis defended against Butler set the tone for the match.
"That was a big part of our plan, the adjustments from last game to this game was to try to keep those guys on him as much as possible. They rose to the challenge. They really stepped up. Obviously, it's one game, we still have work to do. But tonight's game, those guys did a great job," said Vogel.
Butler was all praise for Davis as well. "He contests a lot of shots, blocks shots. But I just think I got to be better at getting my guys involved, more dribble hand-offs, more screens, maybe playing a little bit without the ball, playing off the ball," said Butler.
Miami Heat head coach Erik Spoelstra isn't losing hope just yet. "Our guys love the competition and love the challenge. We are here for a purpose. We never expected this to be easy. We'll just rest and recover tomorrow. I think everybody could probably use that a little bit. Recalibrate, get back to work on Thursday. I know our group's going to be ready," said Spoelstra. (ANI)