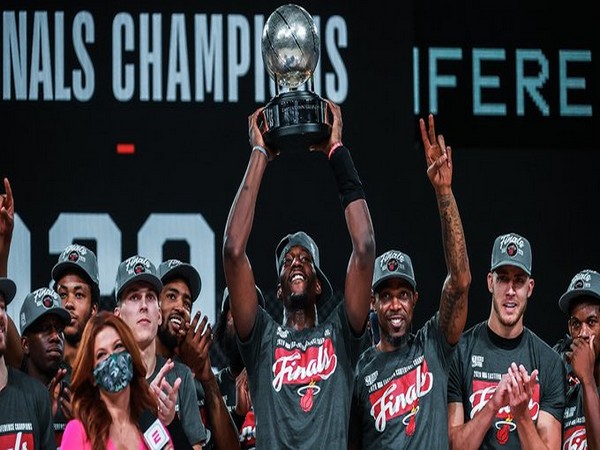 Miami [US], September 28 (ANI): Bam Adebayo had taken the blame for the Miami Heat's loss in Game 5 of the Eastern Conference Finals against the Boston Celtics. But he made it up in Game 6 with 32 points and 14 rebounds, taking his side to the NBA Finals for the first time since 2014.
Heat defeated Celtics 125-113 to win the series 4-2 late Sunday and will now compete against LA Lakers for their fourth NBA title. This also makes Heat the only franchise to appear in the NBA Finals six times in the last 15 years.
"Bam Adebayo is going to become one of the great winners in history just because he's so competitive. He moves the needle in every single way. You can't put an analytic to his game and that's probably why he was overlooked in college. He competes for every single possession. He wants the responsibility, and he wants the accountability, and he isn't afraid of putting that responsibility on his shoulders," said Miami Heat head coach Erik Spoelstra in an official statement.
Spoelstra heaped praise on his team and said that he loves being part of this group. "For the guys that have been in our organization for so long, we understand how difficult it is to get to this point. So, we just want to enjoy it for a night. I do want to acknowledge Boston. They are a class act, class organization. It was a great series. In many ways, this was a seven-game series, just looking at how competitive it was," said the head coach.
Boston Celtics head coach Brad Stevens expressed that Heat's physicality made the difference. "They are strong, physical and tough. My regret would be the outcome of the series, but I don't regret the work we put in or how we prepared or how hard the guys worked. There are other teams out there and they deserve credit for taking advantage of every circumstance," said Stevens.
The head coach added that the Celtics players gave it everything they had in the Eastern Conference Finals. "I thought we did a lot of tough things too. I thought our guys tried to play physical, but it's more of a credit to them, it's nothing against our guys at all. Miami made great plays and I credit them for that. They are a super team and have a super coach," said Stevens. (ANI)