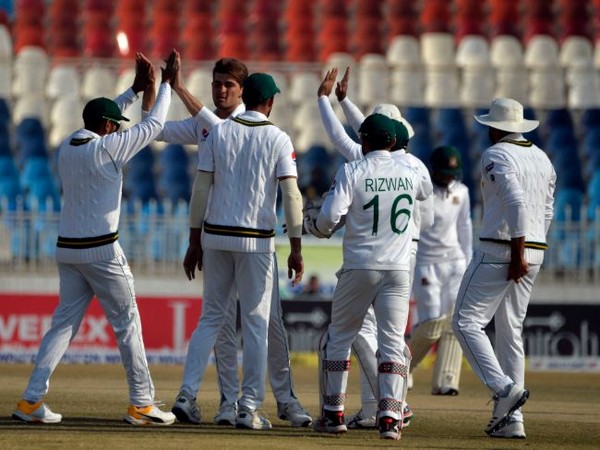 Rawalpindi [Pakistan], Feb 10 (ANI): Naseem Shah and Yasir Shah shined as Pakistan defeated Bangladesh by an innings and 44 runs in the first Test here on Monday.
Both Naseem and Yasir took four-wickets each in Bangladesh's second innings to throttle visitor's batting line-up and ended their innings at 168 runs on day four.
After resuming the day four from 126/6, Bangladesh had a poor start as Mominul Haque (37) was given LBW off Shaheen Shah Afridi's delivery in the very first over of the day.
Liton Das was then joined by Rubel Hossain on the field. The duo played very slow-paced innings and added such 26 runs on the board before Mohammad Abbas got hold of Hossain (5).
Soon after, Das was also given LBW off Yasir's ball which ended his 29-run innings. Ebadot Hossain and Abu Jayed were the next two batsmen but Yasir, in his next over, removed Jayed to end Bangladesh's second innings.
Earlier, Bangladesh had scored 233 runs in their first innings while Pakistan racked up a massive total of 445 runs in their first innings. Shan Masood and Babar Azam scored 100 and 143 runs respectively to help Pakistan put up a massive total. (ANI)