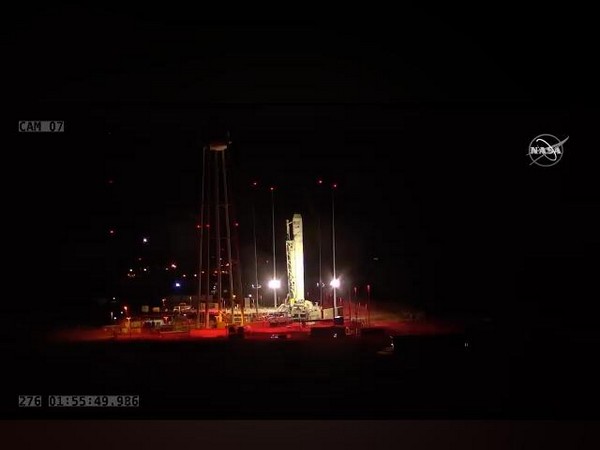 By Reena Bhardwaj
Wallops Island [US], October 2 (ANI): The launch of Northrop Grumman's Antares rocket bound for the International Space Station (ISS) was scrubbed by about 9:40 p.m. due to an unknown problem with a component of ground support equipment.
The commercial cargo spacecraft, a Northrop Grumman Cygnus, was set to blast off on Thursday night carrying the name of deceased NASA astronaut Kalpana "K.C." Chawla, the first Indian-born woman to enter space, for her key contributions to human spaceflight.
"Tonight's launch attempt for @NorthropGrumman's Antares rocket to send the #Cygnus resupply craft to the @Space_Station was scrubbed about 2 minutes and 40 seconds before liftoff due to an unknown problem with a component of ground support equipment," NASA tweeted.
"We have scrubbed tonight's #Antares launch attempt after receiving off-nominal data from ground support equipment. Stay tuned for the time of the next launch attempt," Northern Grumman.
This marked the second delay in total for Northrop Grumman's latest commercial resupply mission. The night launch was already pushed back from its original launch window of Tuesday evening due to weather conditions.
NASA has yet to detail specific reasons for the abort, after needing to delay at the original 11-minute mark due to a boat in the range.
On the NG-14 mission, the S.S. Kalpana Chawla was supposed to deliver approximately 3,630 kilograms of cargo to the station.
Research flying aboard the Cygnus includes the test of a biologic drug that could be used for the treatment of leukaemia, a plant growth study that will cultivate radishes as a model for future crops in space, a compact toilet for astronauts to use on deep-space exploration missions and a 360-degree virtual reality camera that will be used to film during a spacewalk for an immersive cinematic production.
Northrop Grumman, an American global aerospace and defence technology company said that this mission is named after Chawla in memory of the mission specialist who died with her six crewmates aboard the space shuttle Columbia in 2003 Northrop Grumman stated that it is proud to celebrate the life of Kalpana Chawla and her dream of flying through the air and in space.
"It is the company's tradition to name each Cygnus after an individual who has played a pivotal role in human spaceflight," said Northrop Grumman.
While Chawla made the ultimate sacrifice in service to the space program, her legacy lives on. She has not only inspired her colleagues but also many back in India, to follow in her footsteps. Her final research conducted onboard Columbia helped understand astronaut health and safety during spaceflight.
Born in Haryana, India, Chawla moved to the United States to earn her master's and doctorate degrees in aerospace engineering from the University of Texas in 1984 and University of Colorado in 1988, respectively. She then began her career at NASA, conducting research in fluid dynamics at the Ames Research Center in California.
After becoming a naturalized U.S. citizen, Chawla applied for and became a NASA astronaut as a member of "The Flying Escargot," NASA's 15th class of trainees. In 1997, she launched on STS-87, a 15-day shuttle mission that was dedicated to the science flying as part of the fourth United States Microgravity Payload (USMP-4).
Chawla's second spaceflight, STS-107, came to a tragic end on February 1, 2003, following 16 days of conducting science onboard the space shuttle Columbia.
A small piece of foam that struck the orbiter's left wing during launch created a hole that went undetected during the mission. Upon Columbia's return to Earth, hot plasma entered the wing, tearing it apart, and the resulting loss of control led to the vehicle disintegrating and the death of the crew. (ANI)
.