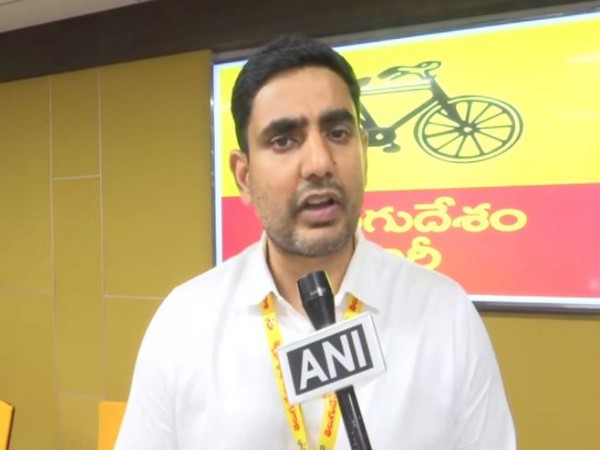 Amaravati (Andhra Pradesh) [India], January 25 (ANI): TDP National General Secretary and former Minister Nara Lokesh has condemned the manner in which the police tried to file false "rape cases" against the student activists of Telugu Nadu Students Federation (TNSF) just for trying to protest at the Chief Minister's residence.
Lokesh deplored that the ruling party was going to extreme lengths as part of its vicious agenda to suppress the voice of the youth and the students. The student activists were only going to protest against GO 77 after giving a call for the 'Chalo CM residence siege', according to an official release.
In a statement here on Sunday, Nara Lokesh asked whether it was correct on the part of the police to book a 'rape case' against protesters. This was clear proof of the vindictive attitude that reflected in all policies of this Government in the past 20 months. The false rape cases should be immediately withdrawn and the arrested TNSF students should be released from police custody.
Lokesh slammed the ruling YSRCP leaders for adopting atrocious arm-twisting tactics instead of conceding the demands of the students. The agitators were just demanding the withdrawal of GO 77 which was depriving the poor PG students in private colleges of their educational opportunities.
The Government should continue to give them fee reimbursement in accordance with the promise made by the Chief Minister during the election.
Lokesh advised the Government not to play with the lives of the students by denying them the benefits of the fee reimbursement programme. The GO 77 was spoiling the chances of thousands of students doing PG courses. The ruling party was depriving the weaker sections and the backward classes of their opportunities for higher studies. It was wrong to prevent the students from exercising their democratic right to protest.
Stating that the Jagan regime has adopted anti-student policies, Nara Lokesh said that the future of the young generations in AP was in danger now. The Chief Minister had miserably failed to fulfil his promise to create job opportunities for the educated unemployed youth.
Industrial development has received a huge setback with the investors going away from the State following the Government's hostile attitude. Not a single industry was brought to AP since Jaganmohan Reddy became the CM.
Lokesh deplored that the youth were not being allowed to voice their aspirations. When anybody questioned the Government's policies, they were being targeted and persecuted.
Calling for public awareness, Lokesh warned that all sections of society including youth, students, farmers, women and coolies would rise in revolt if the Jagan regime continued its fascist rule. Without losing any time, the Government should start focusing on educational and job opportunities for the young generation. (ANI)