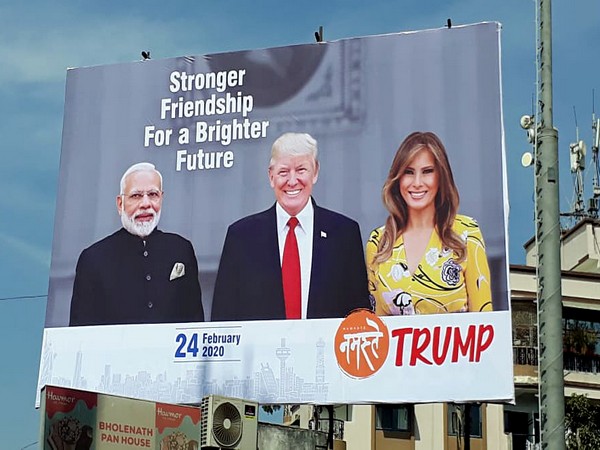 Preparations are in full swing in Ahmedabad to welcome US President Donald Trump for a two-day visit to India. Ahmedabad Municipal Corporation said that works, which are being done in the view of Trump's visit in the city, are of permanent nature.

When asked about the costing of the event, Vijay Nehra, Ahmedabad Municipal Commissioner told ANI, "Ahmedabad Municipal Corporation is having a very good financial health. Most of the works that we are doing are of permanent nature which will help us in the coming years."

The US President will reach Ahmedabad by noon on February 24 and will be there in the city for three hours. Here Trump is slated to address a crowd of more than 100,000 people which is expected to turn up for an event at the Motera Stadium in Ahmedabad. Namaste Trump is expected to be on the lines of the "Howdy Modi" programme hosted by the Trump government las year.

"Ahmedabad Municipal Corporation has spent funds mainly on upgrading the infrastructure around the stadium which is going to be used by the people in the coming time. In the future, this stadium is expected to host many important matches," he said.

22 kilometres road is being revamped with enhanced beautification such as lighting, wall paintings, flowering and planting big trees alongside the roads.

While the development ok in Ahmedabad is stated be of a permanent nature, a new wall has become a subject of much debate. The construction of a 4 feet high wall by the Municipal corporation is under question here. The under-construction wall is built in a way to hide the slums that are in the path of the Modi-Trump roadshow. https://twitter.com/vnehra/status/1229980961196118021 However, Vijay Nehra, Ahmedabad Municipal Commissioner says the wall was approved two months prior to the announcement of the event. According to the authorities, the wall is build to prevent encroachment of sidewalks. The Municipal commissioner also said that affordable homes for the poor are being provided by the authorities.
0
0
0