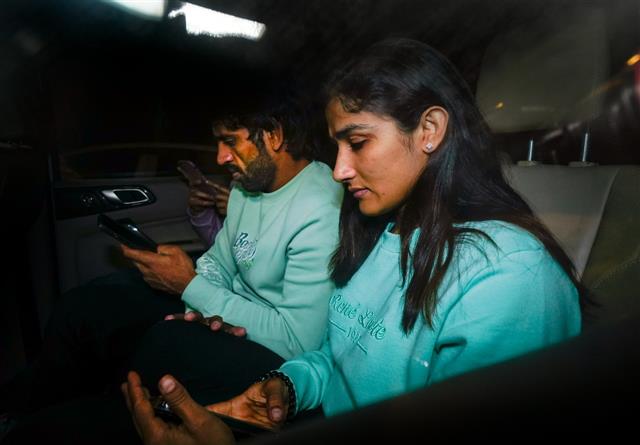 Top Indian wrestlers’ meeting with Union Sports Minister Anurag Thakur remained inconclusive on Thursday night as they refused to back down from their demand that the government immediately disband the Wrestling Federation of India.

The marathon meeting began at around 10pm on Thursday, the second day of the wrestlers’ protest against WFI president Brij Bhushan Sharan Singh.

The wrestlers left Thakur’s house at 1.45 am and did not speak to the reporters waiting outside.

Thakur flew to Delhi from Himachal Pradesh after an earlier meeting between government officials and the protesting wrestlers remained inconclusive.

The wrestlers will again meet the sports minister on Friday, according to government officials.

The ministry cannot force Brij Bhushan Sharan Singh to resign unless it receives a written reply from the WFI since the government itself has asked the wrestling body for an explanation.

The WFI is yet to respond to the Sports Ministry, which on Wednesday gave the wrestling body 72 hours to respond to allegations of sexual harassment of several women athletes.

According to sources, the government wants the wrestlers to end their protest but the athletes are adamant that the WFI should be disbanded first.

“The government can resolve other issues later. We are fine with that, but it must disband the WFI first,” a source close to the wrestlers told PTI.

During the hour-long meeting, the wrestlers were asked to end their protest and assured that their grievances woull be addressed.

Former wrestler and BJP leader Babita Phogat was also part of the meeting to break the deadlock.