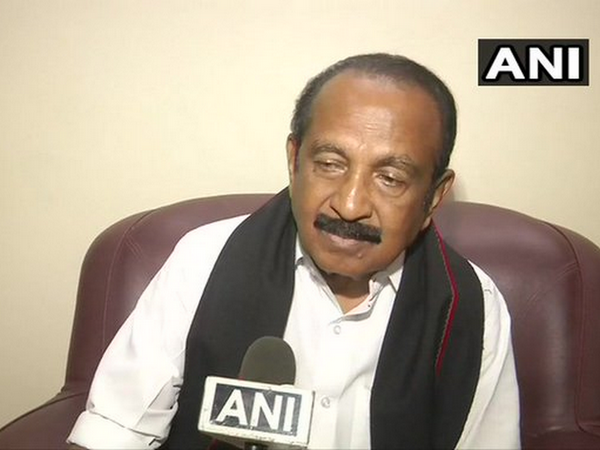 Chennai (Tamil Nadu) [India], October 15 (ANI): MDMK Chief and MP Vaiko on Thursday asked Actor Vijay Sethupathi not to act as cricketer Muthaiyah Muralidharan in the film 800 as the latter is a 'disappointment' for the Tamilians across the world.
MDMK Chief and Rajya Sabha MP Vaiko in his statement today stated that Vijayasethupathy should avoid acting as Muthaiah Muralidharan who is 'traitor' to the Tamil cause.
"When Srilankan President Rajapakshe announced that the civil war against Sri Lankan Tamil Ezham got over, Cricketer Muthaiah Muralidharan said it was a Memorial Day. Lakhs of Tamil people have lost their relatives and are still searching for them. When Tamilians who lost their relatives were sitting on fast and protesting, Muralidharan said they are doing drama," said Vaiko.
"Muralidharan born as a Tamilian and brought up as a Sinhala, his biopic is being produced by a Sinhali firm and has been titled 800. The news that talented actor Vijay Sethupathi is going to act as Muralidharan is disappointing for Tamilians all over the world," he added.
One and a half lakh Tamils have lost their lives, and over 90,000 women became widows and during their sorrow, Muthaiah Muthaiah Muralidharan has only ignored their plight, Vaiko stated.
"If Vijay Sethupathy acts as Muralitharan it would cause great dishonour to him and that should not happen. I request Vijay Sethupathi to not act in this biopic," he added. (ANI)