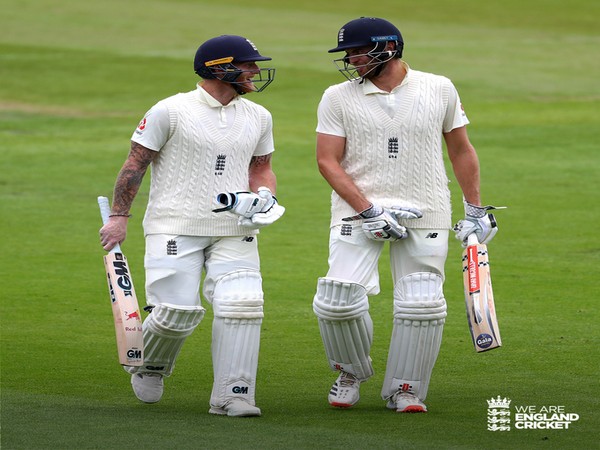 Manchester [UK], July 18 (ANI): West Indies trail by 437 runs at the end of day 2 in the second Test against England at Old Trafford here on Friday after the hosts declared their first innings on 469-9 in 162 overs.
Kraigg Brathwaite and Alzarri Joseph remained unbeaten on 6 and 14 runs respectively. Sam Curran dismissed John Campbell after scoring just 12 runs. Windies ended the day's play at 32/1 in 14 overs.
Earlier, Ben Stokes and Dom Sibley guided the side to the massive total after resuming their innings from 86 and 59 respectively on day 2 and went on to smash individual tons. They built a 260-run partnership for the fourth wicket.
Sibley played a knock of 120 runs before he was picked by spinner Roston Chase. Ollie Pope and Jos Buttler had a brief partnership with Stokes for the fifth and sixth wicket respectively. Chase caught Pope (7) in front of the wickets and sent him back to the pavilion.
Buttler then joined Stokes and stitched a partnership of 43-run. Chase got rid of Stokes at the team score of 395. Shane Dowrich caught Stokes behind the stumps off Chase. He played a knock of 176 runs studded with two sixes and 17 fours.
In the same over, Chase bagged Chris Woakes on a golden duck as he was caught by Kemar Roach at gully.
Buttler scored 40 runs while Sam Curran added 17 runs to the scoreboard before gifting his wicket to Chase.
Dominic Bess and Stuart Broad built an unbeaten partnership of 42-run for the last wicket before the hosts declared their innings. Bess scored 33 runs while Broad remained unbeaten on 11 runs.
For Windies. Chase bagged five wickets while Roach scalped two wickets. (ANI)