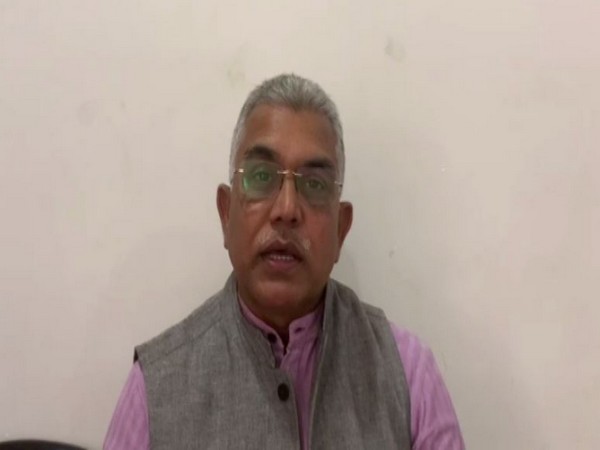 Purulia (West Bengal) [India], January 6 (ANI): West Bengal Bharatiya Janata Party (BJP) chief Dilip Ghosh on Wednesday targeted Chief Minister Mamata Banerjee for announcing to bring resolutions against farm laws and alleged that Trinamool Congress (TMC) Chief is diverting the attention of the public.
"Whenever the Mamata Banerjee government gets into crisis, she comes with a stand like this. Now she has said she will bring a resolution against farm laws. In the Legislative Assembly, one takes a decision regarding the Opposition and comes with a condemnation motion against the Central government. We have seen this in demonetization and the GST and they involve in the political drama," Ghosh told ANI.
"Now she has said she will bring resolution against farm laws. On the other hand, Congress and the Left said that they will bring a no-confidence motion against the Mamata Banerjee government. There is a crisis on both sides for Mamata Banerjee. Her party is also in crisis. That's why she had to do drama like this to divert attention," he added.
On January 4, the Chief Minister announced that her government will bring a resolution against the farm laws in the state Assembly.
"I am in favour of farmers and want the withdrawal of these three bills for the sake of the country and farmers. Before the bills came in, they had made the godowns. Their political intention is clear and that's why they are not taking it back," Banerjee said.
Farmers have been protesting at the borders of Delhi since November 26 last year against the newly enacted farm laws -- Farmers' Produce Trade and Commerce (Promotion and Facilitation) Act, 2020, the Farmers (Empowerment and Protection) Agreement on Price Assurance, and Farm Services Act, 2020, and the Essential Commodities (Amendment) Act, 2020. (ANI)