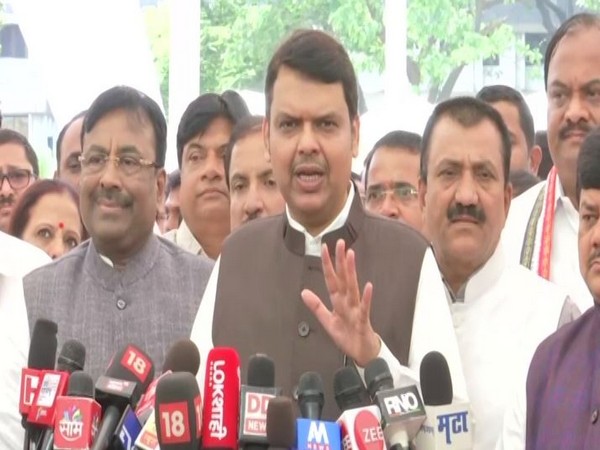 Mumbai (Maharashtra) [India], Mar 6 (ANI): Former Maharashtra chief minister and BJP leader Devendra Fadnavis on Friday accused the Maha Vikas Aghadi government of neglecting the farmers in the budget.
Reacting upon the maiden budget of the Uddhav Thackeray government, Fadanvis said: "Farmers are completely neglected, no loans have been waived off except crop loan. CM Uddhav had announced that farmers will be helped with Rs. 50 thousand to 1 Lakh for the crop damages per hectare but now they are not even talking about this in the budget."
"They are alleging that state was loan burdened during our time but while going through records it's clear that they have burdened the state with the loan. They have neither announced any new scheme for farmers nor have announced an increase in basic facilities in the budget," he added.
Earlier today, Deputy Chief Minister Ajit Pawar presented the state budget in the Assembly and said that the Centre only approved around Rs 956 crores. So instead of waiting for the Centre's help, we took the initiative to help the farmers.
Fadnavis accused the Maharashtra government of forgetting the names of various parts of the state.
He said: "In the name of Budget, we only heard a speech of a public meeting of finance minister. There was no data, no analysis, no expectations and no details of profit and loss in the budget. The government has forgotten Vidarbha, Marathwada and North Maharashtra which are part of the state as they didn't even take names of these regions. Konkan's name was taken but nothing was given to Konkan."
Accusing the Maharashtra government of changing the names of central schemes, Fadnavis said: "Most of the schemes they have announced are actually financed by the Centre and they are changing names of central schemes and giving them their own name with Centre's money." (ANI)