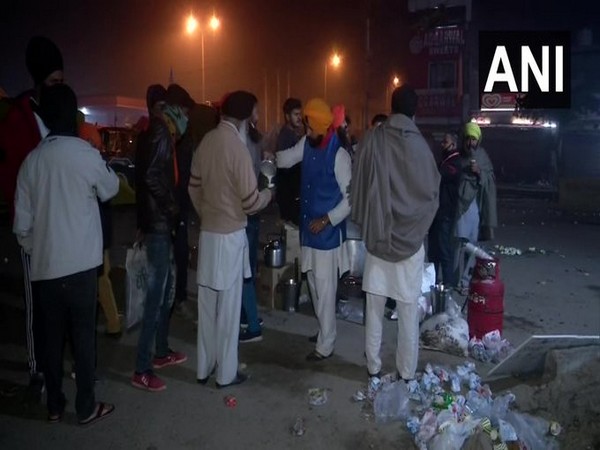 New Delhi [India], December 4 (ANI): Locals distributed tea to protesting farmers stationed at the Singhu border (Delhi-Haryana border), on Friday night.
The next meeting between Centre and farmer leaders is scheduled to be held on December 5.
Locals here were seen serving fresh tea to the agitating farmers amid the cold weather conditions.
"I have been serving the farmers here. Farmers here have been protesting amid cold weather so, I along with my family members, are distributing a tea among the farmers," said a local.
Another local, Praneet Singh told ANI that the farmers who are holding a peaceful protest have faced 'terrible' things.
"A large number of forces have been deployed here at the border. They have been protesting peacefully however they had to face so many terrible things," he added.
Meanwhile, Union Agriculture Minister Narendra Singh Tomar has assured farmers after the talks that MSP will not be touched, the government was open to their suggestions for parity between mandis under APMC Act and those outsides and for disputes under the new farm laws being adjudged in courts.
The farmers are protesting in border areas of Delhi against three farm laws enacted by the government recently. The farmers are protesting against The Farmers' Produce Trade and Commerce (Promotion and Facilitation) Act, 2020, The Farmers (Empowerment and Protection) Agreement on Price Assurance and Farm Services Act, 2020, and The Essential Commodities (Amendment) Act, 2020. (ANI)

Never felt that I needed to sub Bale: Mourinho