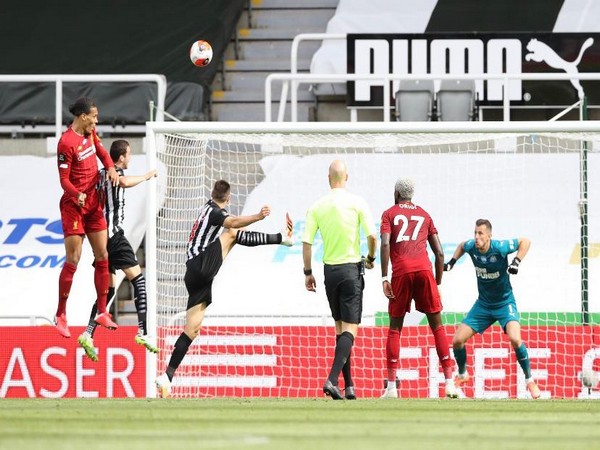 Newcastle [UK], July 27 (ANI): Liverpool defeated Newcastle by 3-1 and finished the ongoing 2019-2020 Premier League season with a club-record 99 points here on Sunday.
Liverpool had already sealed the Premier League title on June 26 and lifted the title on July 23 after they played their final home match of the recently concluding season.
During the match, the Jurgen Klopp-led side did suffer an early setback when Dwight Gayle put the hosts in front after just 26 seconds of play. However, Liverpool responded well to the setback and dominated the remainder of the contest.
Virgil van Dijk drew Liverpool level before the interval with a towering header from an Alex Oxlade-Chamberlain cross before Divock Origi and Sadio Mane struck after the break.
Liverpool ended the 2019-2020 Premier League season with a massive 18-point lead over the second-placed club Manchester City. The club won 32 of their 38 matches in the league while witnessing three draws and as many defeats. (ANI)