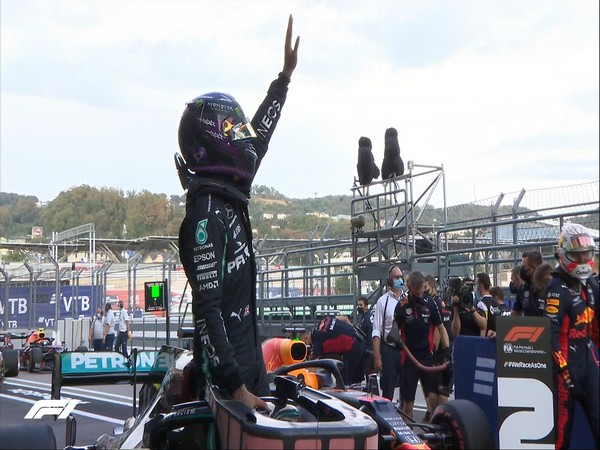 Sochi [Russia], September 26 (ANI): Mercedes’ Lewis Hamilton took a pole position in a dramatic qualifying race at the Russian Grand Prix after narrowly avoiding early elimination when Sebastian Vettel crashed.
Hamilton claimed his 96th pole position by a huge 0.563s from Max Verstappen despite coming within a matter of seconds of being knocked out of Q2 in a qualifying session that saw Sebastian Vettel crash heavily to bring out the red flags.
Hamilton had his Q2 time deleted for a track limits infringement leaving him in the drop zone when Vettel crashed at Turn 4 with just over two minutes left of the session, bringing out the red flags.
When the session was restarted, Hamilton crossed the line with less than two seconds to spare to begin his flying run – his last chance to get into Q3. He then posted the fourth quickest time to make it to the pole position shoot out.
A stunning first lap in Q3 from the six-time champion then saw him establish a new track record with a 1m 31.391s effort before the Briton narrowly improved it on his second run to claim what was only his second pole position at the Sochi Autodrom – while Valtteri Bottas, who’d led Q1 and looked fast all weekend, will have been hugely disappointed not to at least make the front row, at a track he’s always shone on.
Behind the top three, an excellent effort from Sergio Perez in an update-less Racing Point RP20 saw him claim fourth on the grid, ahead of the Red Bull of Daniel Ricciardo in fifth – the highest the Australian will ever have started in Sochi – with Perez’s teammate Lance Stroll unable to show what he could do after a mechanical issue saw him drop out in Q2.
Carlos Sainz was the leading McLaren in P6, 1,246s off Hamilton’s pace, ahead of the second Renault and second McLaren of Esteban Ocon and Lando Norris, with the AlphaTauri of Pierre Gasly P9. Alex Albon, meanwhile, will have been disappointed to be starting the race 10th, the Thai driver 1.704s off the pace for Red Bull. (ANI)