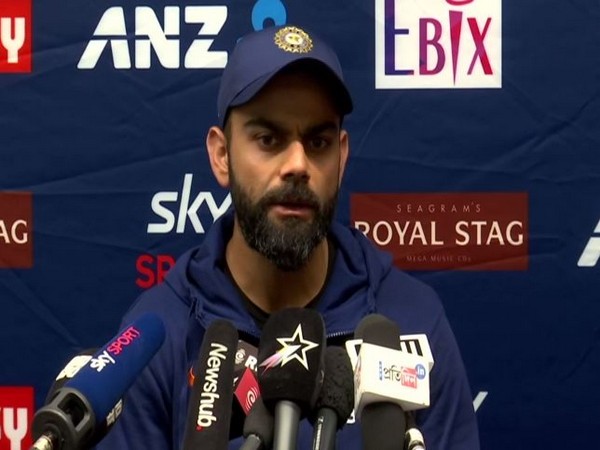 Wellington [New Zealand], Feb 24 (ANI): Indian skipper Virat Kohli is unfazed despite failing to perform well in the first Test against New Zealand saying that 'scores do not reflect the way you are batting' and he is batting really well.
"I am absolutely fine and I am batting really well. I feel sometimes scores do not reflect the way you are batting. That is what happens when you do not execute yourselves well. When you play so much cricket and you play for so long, obviously you will have three or four innings which do not go your way," Kohli said in the post-match press conference here on Monday.
"If you try to make too much out of it, then it will keep piling on. I think it is about staying in good space. I know the chat on the outside changes with one innings but I do not think like that. If I thought like people on the outside, I will probably be outside right now. It is all about doing the basics right and putting in hard work in the practice," he added.
India performed poorly with the bat throughout the match as they scored 165 runs in the first innings and managed 191 in the second innings.
Kohli scored two runs in the first innings and 19 in the second innings against the hosts, who went on to win the match by 10 wickets.
The skipper said that his side will try to put up New Zealand bowlers under pressure in the next Test.
"We will definitely be more positive. There is no doubt about that, especially in the first innings. We will try to put their bowlers under pressure," he said.
With this win, New Zealand has moved to the fifth spot in the World Test Championship standings. The Kiwis and India will now lock horns in the second Test at Christchurch from February 29. (ANI)

Problems and complaints of minorities should be resolved in a timely manner, says minister Dharmsot