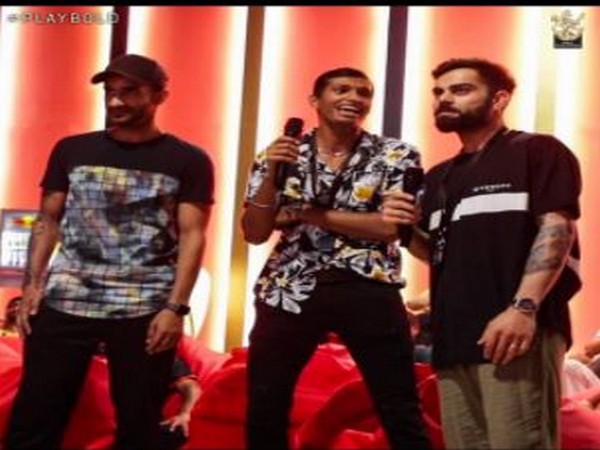 Dubai [UAE], September 30 (ANI): Virat Kohli and company had an off-field refreshment session after the tense encounter against Mumbai Indians in the ongoing Indian Premier League (IPL).
On Monday, Royal Challengers Bangalore (RCB) defeated Mumbai in a Super Over thriller as the scores were levelled after the 20 overs at Dubai International Stadium.

Taking to Twitter RCB wrote, "A fun game of pool volleyball and a karaoke night, the Royal Challengers embrace the bonding sessions on rest days with plenty of smiles and laughter."
The franchise also shared a video in which RCB players were seen playing pool volleyball and having their time off the field. The Bangalore-based franchise is leaving no stone unturned to keep their players and staff members fresh and active in the tournament.
After enjoying the pool session, the players gathered for a karaoke night to enhance the bonding and team spirit.
In the Super Over, Mumbai Indians were able to score just seven runs as Saini bowled a brilliant over, and Virat Kohli and AB de Villiers chased it down with ease. In the normal match action, both Mumbai and Bangalore posted 201 runs on the board.
The tournament, which started on September 19, has so far seen two matches which have gone down to the Super Over.
Chasing 202, Mumbai found itself at 78/4, but it was then that Ishan Kishan got together at the crease and formed a stand of 119 runs to take the side closer to the target.
Ishan Kishan played a knock of 99, studded with two fours and nine sixes. On the other hand, Pollard registered an unbeaten inning of 60 off just 24 balls with the help of three fours and five sixes.
For RCB, pacer Navdeep Saini finished with figures of 0-43 in his four overs. The pacer also bowled the Super Over, in which he conceded just seven runs even though Pollard and Hardik Pandya were at the middle.
In the match against Mumbai Indians, RCB left out Josh Philippe and de Villiers donned the gloves to do the wicket-keeping duties. With bat in hand, the Proteas star had played an unbeaten knock of 55 runs off just 24 balls with the help of 4 fours and 4 sixes to take RCB's score to 201/3 in the allotted twenty overs.
RCB will next take on Rajasthan Royals at Sheikh Zayed Stadium in Abu Dhabi on Saturday, October 3. (ANI)