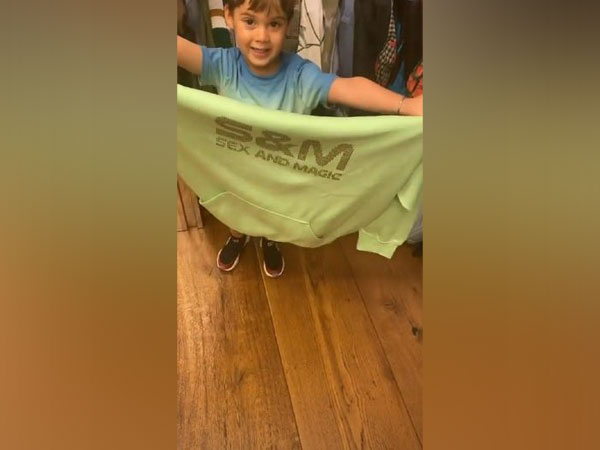 New Delhi [India], April 23 (ANI): Filmmaker Karan Johar's little munchkin Yash on Thursday embarrassed his father by showing off the filmmaker's hoodie that read -- 'Sex and Magic' in a video shot in KJO's walk-in closet.
The 47-year-old filmmaker took to Instagram Story and shared a video that featured KJO's adorable toddlers Yash and Roohi roaming around in the 'Kuch Kuch Hota Hai' director's walk-in closet.
In the short clip, Karan shows Yash who is seen goofing around with one of Karan's hoodie which has 'Sex and Magic' written on the chest.
Karan goes on to explain that he is embarrassed. He asked the toddler laughingly "Yash, why are you holding this? Oh god, am so embarrassed."
Earlier, the director shared a video in which he is seen flaunting the singing skills of his little munchkins -- Roohi and Yash.
The twins are seen sitting on a sofa with a guitar in their hand and trying really hard to sing in their adorable voices but are only able to hum "La La La La La," in chorus.
Lately, Karan has been sharing updates of his quarantine time with kids Yash and Roohi and mom Hiroo Johar. Earlier, the 'Kabhi Khushi Kabhie Gham' director shared a video where Yash told his father not to have burgers in breakfast, or else he will become fat. (ANI)