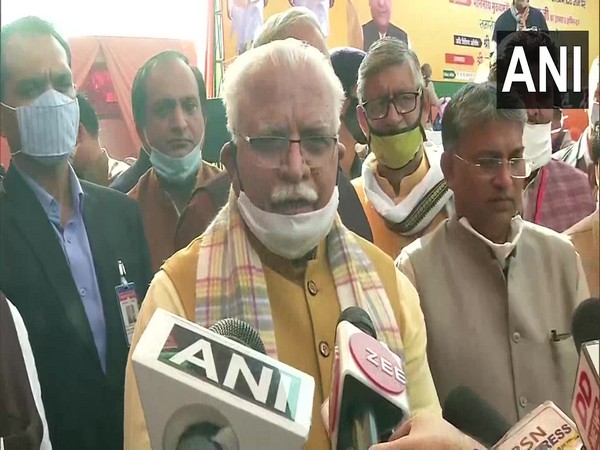 Haryana [India], November 29(ANI): Haryana Chief Minister Manohar Lal Khattar on Sunday hit back at his Punjab counterpart Captain Amarinder Singh over "lack of coordination" on farmers protest.
"If any dangerous situation arises due to coronavirus, the Punjab government will be responsible for it. I tried to speak to Amarinder Singh on this matter but he denied receiving any call. Later when I showed the proof, he was left speechless," Khattar said.
"A Chief Minister of one state doesn't use cuss words against a CM of another state. I am not going to comment on this, people are already expressing their views on social media and elsewhere. Provacating protest is a pre-planned strategy of Congress party and Punjab government," the Haryana CM said.
Speaking to ANI he said, "due to coronavirus, we decided not to allow any huge gatherings. We gave permission of up to 100 people for indoor programs and 200 for outdoor events. But I am shocked to see that the people of Punjab didn't adhere to the rules and the Punjab Government also encouraged the move of protest at this time. If any serious conscience occurs in the future, the Punjab government will solely be responsible for it."
We blocked the ways of the farmers because nobody would allow such a huge gathering in Delhi. And when protestors tried to move forward, we decided not to use force. I don't consider tear gas and water cannon as a way of force. It is a means of restricting people,' Khattar told ANI.
Thousands of farmers from Punjab and Haryana are protesting against the Centre's recently enacted farm laws, fearing that the new laws would lead to the dismantling of the minimum support price system (MSP).
Meanwhile, the Delhi administration has allotted a ground in Burari to the farmers for protesting. While some hundred shifted there on Saturday morning after they were allowed to enter Delhi through the Tikri border, thousand others are demanding that they be allowed to enter the heart of the city.
The central government has invited several farmers' outfits for talks on December 3. Already three rounds of talks have been held which were inconclusive. (ANI)