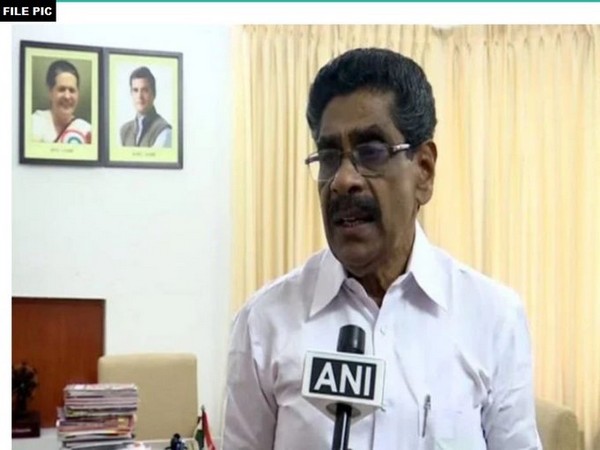 Thiruvananthapuram (Kerala) [India], November 22 (ANI): Kerala Congress on Sunday opposed the addition of 118 (A) amendment to the Kerala Police Act, saying that it has been introduced as part of a conspiracy to silence voices against the state government.
Congress state president Mullappally Ramachandran called the move an act of "absolute fascism", and alleged that it will be used to curb voices against the state government.
"This is absolute fascism. Serious allegations including gold smuggling and drug dealing have surfaced against the state government. These were exposed by the media. This law has been introduced as part of a conspiracy to silence voices against the government," Ramachandran told ANI.
Tagging a news article about the amendment in the Act, Congress leader, and MP from Thiruvananthapuram Shashi Tharoor criticised the 'loosely drafted' law on Twitter, and said it could be used to target 'political opponents'.
"This is troubling. The law responds to several cases of offensive tweets/posts/comments abusing and threatening women, but it is so loosely drafted that it could also be used against political opponents, journalists, and critics," tweeted the Thiruvananthapuram MP.
He further said the new law will be challenged in the court, and it must be reviewed.
"This law can and will be challenged in the courts because any political attack on social media against a party or "class of persons" (eg "Sanghis" or "libtards") could attract its provisions. It must be revised to narrow its application to flagrant cases of abuse and threats only," Tharoor said in another tweet.
Kerala opposition leader Ramesh Chennithala also took to Twitter and called the amendment in the Act a 'tacit move' to silence critics and media.
"Amendment to Kerala Police act shows the intolerance of Pinarayi Vijayan government over free speech. This amendment is against the freedom of speech and expression which is a constitutional right. The new law is a tacit move to silence critics and media. Nothing more, nothing less," tweeted Chennithala.
Amid resistance from the opposition parties, Kerala Governor Arif Muhammad Khan has signed the Kerala Police Act amendment ordinance.
The law aims to stop bullying, insulting, or disgracing individuals through any content and circulating the same through any communication medium. The offenders will be awarded a sentence of three years/penalty of Rs 10,000 or both.
Meanwhile, former Union Minister P Chidambaram and Rajya Sabha MP Dr Abhishek Singhvi Sunday expressed shock over the signing of the Kerala Police Act Amendment ordinance, which the Congress-led opposition says is aimed at "muzzling" the media.
Shocked by the law made by the Left Democratic Front (LDF) government of Kerala making a so-called 'offensive' post on social media punishable by a prison term, according to a tweet by Chidambaram.
Singhvi launched an attack on the Kerala government and raised questions about the authority that judges the offensive content.
"Completely against the jail term for offensive posts in Kerala. Who defines offensive? Who is the one getting offended? And lastly, isn't this a grave imposition on freedom of speech and expression?" asked Singhvi on Twitter. (ANI)