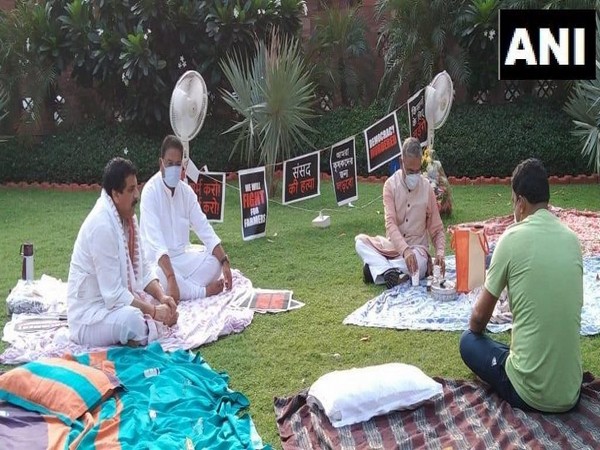 New Delhi [India], September 22 (ANI): Delhi Chief Minister Arvind Kejriwal and Deputy Chief Minister Manish Sisodia on Tuesday lauded Aam Aadmi Party (AAP) MP Sanjay Singh and other suspended Rajya Sabha MPs, for "fighting for the farmers, regardless of the heat, mosquitoes and other inconveniences" while holding a protest at the Parliament premises.
Singh has been suspended from Rajya Sabha along with seven other MPs for unruly behaviour with Deputy Chairman Harivansh during a discussion on agriculture reform Bills on September 20.
Kejriwal and Sisodia took to Twitter and said that suspended MPs are fighting for the farmers.
"Sanjay Singh ji and other MPs struggled throughout the night for the farmers of the country in the Parliament premises. They continued to fight for the farmers, regardless of the heat, mosquitoes and other inconveniences. They are not asking for anything for themselves. They are fighting for democracy and constitution. They are struggling for the farmers of the country," Kejriwal said in a tweet.
"Farmers across the country are saying that these laws will put an end to the farmers. How can such dangerous laws passed by Parliament without voting? Then what is the meaning of Parliament, what is the meaning of elections? If you want to pass the law in the same way then why do you call the Parliament session?," he added.
Sisodia alleged that the government is behaving like the Britishers.
"The British used to run like this - used to commit the crime on the common farmers, traders and workers of India. Black laws were made against them so that Britishers could commit more crimes. Then when Gandhiji and other leaders used to meet them, they also used to give tea. Our rulers are still running the government in the same English style," Sisodia tweeted.
The eight Opposition Rajya Sabha members were suspended by Rajya Sabha Chairman M Venkaiah Naidu for "unruly behaviour" with Harivansh.
On Monday, Venkaiah Naidu announced the one-week suspension of Trinamool Congress' (TMC) Derek O'Brien and Dola Sen, Aam Aadmi Party's (AAP) Sanjay Singh, Congress' Rajeev Satav, Ripun Bora and Syed Nasir Hussain, CPI (M)'s KK Ragesh and Elamaram Karim for "unruly behaviour" with the Rajya Sabha Deputy Chairman on Sunday during the passage of the farm bills.
On Sunday Rajya Sabha witnessed unruly scenes as Opposition members stormed the well and reached the deputy chairman's seat to protest against the Farmer's Produce Trade and Commerce (Promotion and Facilitation) Bill, 2020 and the Farmers (Empowerment and Protection) Agreement of Price Assurance and Farm Services Bill, 2020 and passed by the Upper House through voice vote. (ANI)