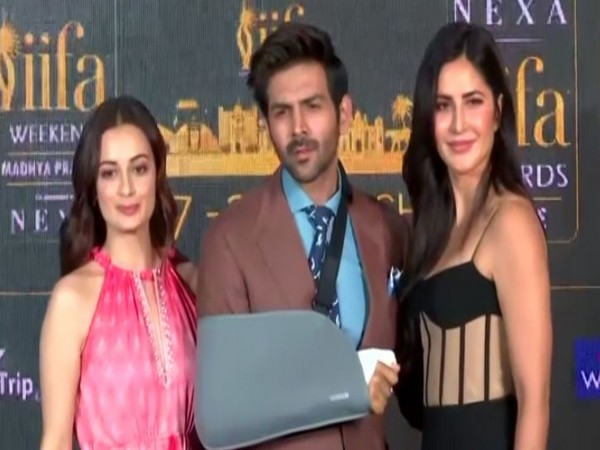 Mumbai (Maharashtra) [India], Mar 4 (ANI): Ahead of the IIFA awards 2020, Katrina Kaif, Kartik Aaryan and Dia Mirza graced the press conference where they shared their previous experience in association with the magical event.
The organizers of the award also appeared here where they announced that this year the event will be conducted in Indore, Madhya Pradesh.
Dia Mirza talked about issues regarding the environment and stated, out the fact that "our existence, our health, growth, success, and well being as a country, and society and as a world is completely interconnected and dependent on nature."
"What has been absolutely amazing in the last few years is the incredible behavioural change that actors who have campaigned for whether it was the beach plastic campaign, or whenever we have spoken about clean air... more and more artists especially the younger generation has been campaigning to bring better awareness," the Dia added.
The 38-year-old actor pointed out that she carries a metal water bottle along with her, which has also influenced the film fraternity. She stated to all the paparazzi that since she has started carrying the metal bottle, she has noticed some effects leading to actresses ditching the single-use plastics, and have seen them carrying their bottles.
" This has also appreciated the writers, directors and actors, to weave the narrative of nature into the crafts and storytelling and the screen as well," she added.
"This IIFA is special as it is being held in Madhya Pradesh. It is an extraordinary state. It's the first state I witnessed my first wild tiger in. Whether it's the Gondh art or the tribal culture, in fact, we were talking about reducing pollution and we gave the tribal ladies cooking equipment that they didn't have to burn coal and wood and they made the most amazing hand made rotis."
Siddharth Kannan hosted the event for Katrina and Kartik where Kartik applauded the trailer of 'Sooryavanshi' while he asked Katrina, who looked drop-dead gorgeous in a black dress to compliment him as well. Kaif then complimented him for the dapper look in the brown suit saying he looks "good even with the sling hand support." 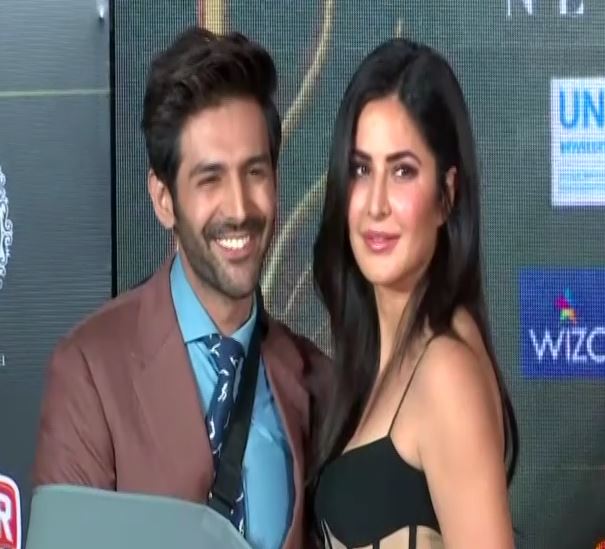 On talking about her appearance on IIFA, Katrina said, "My journey with IIFA has been one of the most special." She also reminisced of the New York awards and last year IIFA awards in Mumbai. She stated, "towards the end of the event, the entire stadium came ahead from the back and stood in front. Every time IIFA comes around everyone looks forward to it, It's one of the most magical nights, I have such fond memories not from Indore (Bhopal) for 'Raajneeti'. 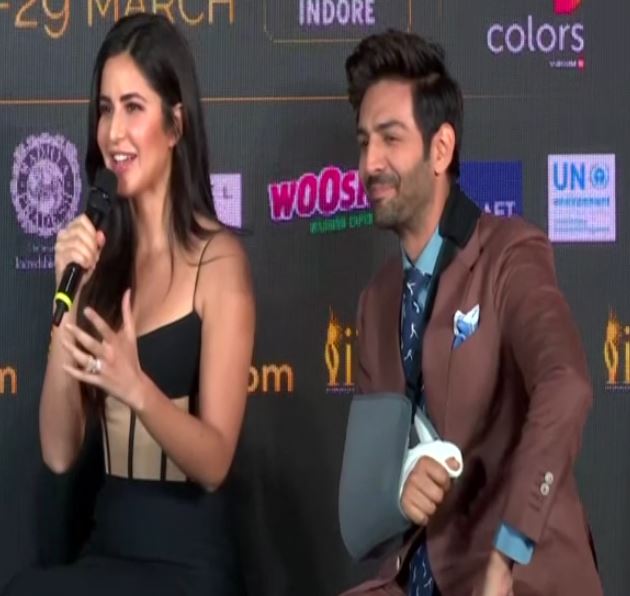 She remembered that she came back 4 kilos heavier and stated that the " food is just incredible and she asks Kartik if he belongs from Indore" to which Katrik replied that he belongs to Gwalior.
The 'Pati Patni Aur Woh' actor shared, " I am from Madhya Pradesh in Gwalior." And stated that his school friends are also coming and had already asked him for tickets. " IIFA is like my family and is too big an event, the best line of the award shows," he added.
"I am very excited as my home state in Madhya Pradesh, I am looking forward to performing over there," said Kartik.
As Salman Khan is hosting the event this year, Katrina calls him entertaining and shares that "it is going to bring the excitement to another level."
While the host Kanan asks them the one thing they wanted to convey to the IIFA fans, Katrina said, " IIFA has always kept its promise of a night to remember. In 2020, Indore is going to be definitely a night to remember and we hope to see everyone there."
Kartik stated, " IIFA is going to be the biggest event of the year, and I hope everyone is going to be there in Indore."
At the end of the event, Kartik asked the audience to applaud Dia Mirza as she is doing commendable work for plastic-free India.
The main IIFA Awards will be a three-day event in Indore from March 27 to March 29. (ANI)