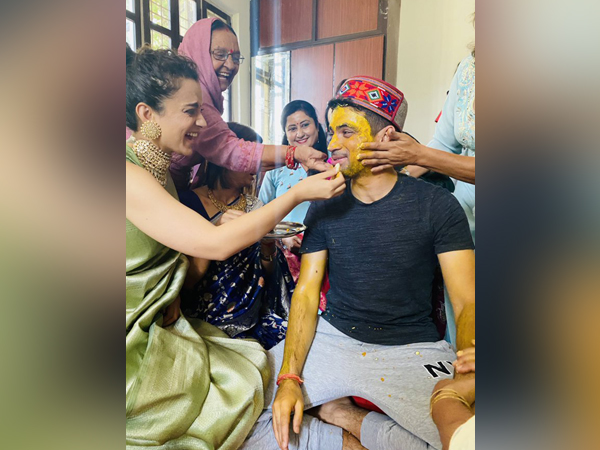 Manali (Himachal Pradesh) [India], October 18 (ANI): Bollywood actor Kangana Ranaut on Sunday shared photographs of the pre-wedding celebrations for her brother Akshat.
The 'Queen' actor posted glimpses of the traditional 'Haldi' (turmeric) ceremony, which is a ritual carried out in Hindu families before the wedding. In the video, posted on Twitter, Kangana along with other relatives are seen playfully smearing her brother's face with Haldi.
Dressed in an olive green handloom saree with a hint of gold, the actor was seen sporting matching gold plated necklace and earrings. Kangana looked stunning with her hair in a neat bun and a low make-up look.
"Today at Nana's house in Mandi for Aksht's Badhai, it's flagging off wedding invites, a ceremony arranged by maternal grandparents," Kangana captioned the video.

‘Nothing has ever been done in Russia of that scale’: Producer ahead of ‘Fire’ release