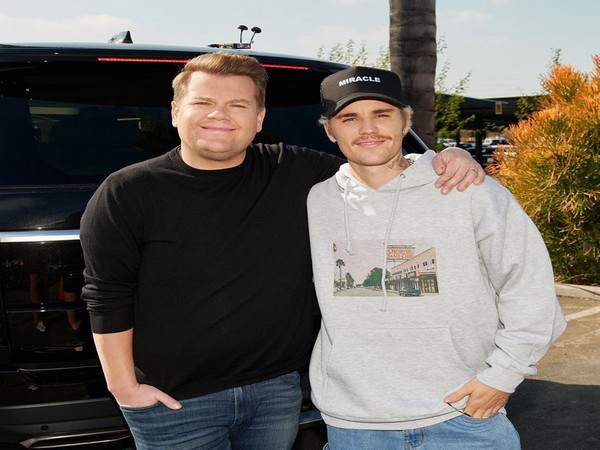 Washington D.C. [USA], Feb 21 (ANI): Canadian singer Justin Bieber and English comedian James Corden played a hilarious game of 'Spill Your Guts' on the latest episode of 'The Late Late Show' on Thursday night. (local time).
According to E!News, the 25-year-old songwriter sat down with the talk show host to ask each other some tough questions. And as fans of the game will know, if either player decides not to answer the question, they have to eat something pretty gross.
The first dare was Bird Saliva, and in order to avoid consuming the bird saliva, Corden had to answer Bieber's question.
The 'Yummy' singer questioned Corden, "I'm 25 years old, your friend Harry Styles is also 25 years old, which 25 years old is more talent?"
To which the show host responded "Cheers, bro." And the late-night show host drank the bird saliva in order to avoid answering! He then told Bieber that he had to have the chilli pepper and shrimp smoothie if he didn't want to answer his next question.
Justin received the next question from Corden as he asked, "Justin, you have performed all over the world. Which country has the worst fans?"
In response, the pop star decided to have a sip of the chilli smoothie and washed it down with some milk.
The 'Cats' star also noted that he has to decide things based on his own experience, and he had a "really great time."
Corden concluded by marking both 4.5 out of five. (ANI)