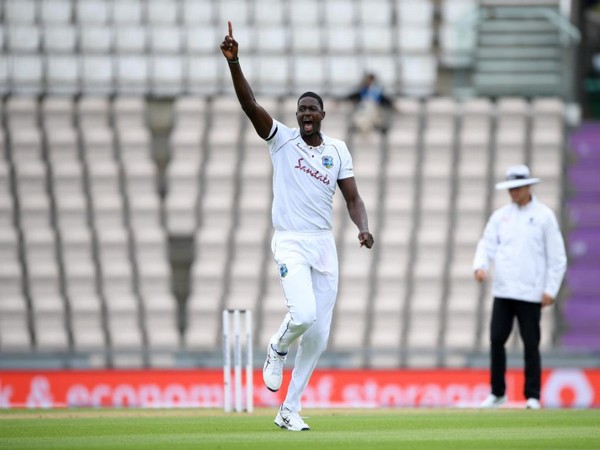 Southampton [UK], July 9 (ANI): Jason Holder's six-wicket haul helped West Indies to restrict England on 204 runs before batsmen took charge to put West Indies on a dominating position on day two of the first Test here on Thursday.
Apart from Holder, Shannon Gabriel played a crucial part in restricting England to a decent total as he took four wickets.
Resuming the innings from 35/1, England witnessed a fine start as both Joe Denly and Rory Burns played cautiously.
Gabriel handed West Indies with their first breakthrough of the day as he got hold of Denly, who scored 18 runs. In his next over, Gabriel removed Burns (30) also, putting the host under pressure.
Zak Crawley and Ben Stokes then took the field and avoided any risky shots but kept the scoreboard running. The duo formed a 20-run partnership before Holder sent Crawley back to the pavilion.
Ollie Pope then joined Stokes but failed to form a good partnership as Holder dismissed him. England skipper was then joined by Jos Buttler and both played brilliantly, taking the team past the 150-run mark.
Soon after crossing the 150-run mark, both Stokes (43) and Butler (35) were dismissed by Holder. The visitors continued their attacking bowling and England were bundled out after putting 204 runs on the board.
After England's first innings, Kraigg Brathwaite and John Campbell opened West Indies innings and provided their side with a good start. Both formed a 43-run partnership before James Anderson handed England their first breakthrough.
Anderson dismissed Campbell, who was given LBW after playing a knock of 28 runs. Shai Hope then took the field but soon after the day's play came to an end due to bad light.
Brathwaite and Hope will resume West Indies' first innings from 57/1 on day three. (ANI)