Skip to content
Home  »  Sports   »   IPL 13: We were just a little timid in our approach, says KKR coach McCullum 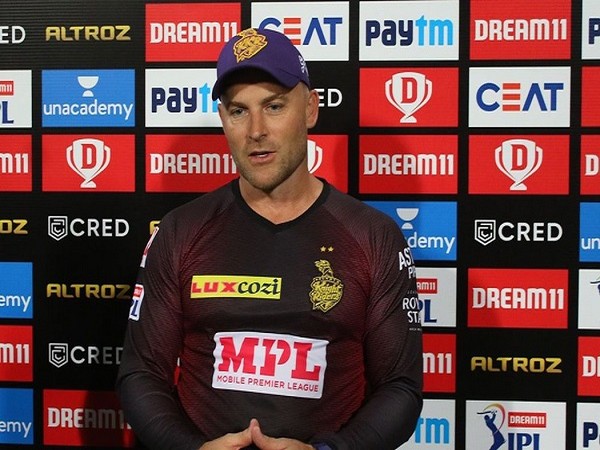 Abu Dhabi [UAE], October 22 (ANI): Royal Challengers Bangalore (RCB) gained an emphatic eight-wicket victory over Kolkata Knight Riders (KKR) on Wednesday, and KKR head coach Brendon McCullum was left frustrated with the team's "timid" approach in the game.
Batting first, KKR had the worst possible start. With the top four batsmen back in the hut by the fifth over, the writing was always on the wall and KKR failed to recover from the early blows to end on 84/8 in their 20 overs.
"Before the game, we spoke about showing some intent especially at the top of the order and, unfortunately, tonight, if anything we probably lacked intent," said McCullum in the post-match press conference.
"So that's something we have to address. We were very poor with bat in hand. You are not going to win too many games from 40 for 6," he added.
Mohammed Siraj was the star of the show as he not only became the first bowler to bowl two maiden overs on the trot but also finished with three wickets, giving away just eight runs.
RCB chased down a total of 85 with eight wickets in hand and 39 balls to spare. Devdutt Padikkal and Gurkeerat Singh Mann played knocks of 25 and 21 respectively.
"In all honesty, I didn't think there was a lot in the wicket. Siraj obviously bowled well and [Chris] Morris at times also. But if anything, we were just a little timid in our approach," the KKR coach said.
"That's a bit frustrating because we spoke at length before the game about trying to be positive and show some strong intent. So that's something we'll have to address in the next few days," McCullum added.
KKR have 10 points and are at the fourth spot. They will now play against Delhi Capitals on October 24. (ANI)