Skip to content
Home  »  Sports   »   IPL 13: We tried hard but couldn’t get over the line, says Muralitharan 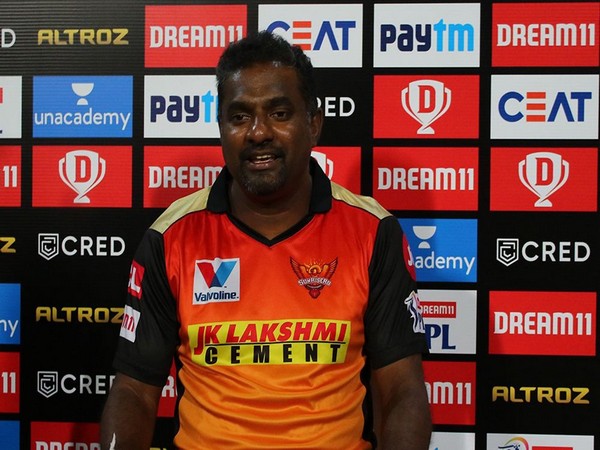 Abu Dhabi [UAE], October 18 (ANI): SunRisers Hyderabad bowling coach Muttiah Muralitharan feels that the side tried really hard but can not get over the line against Kolkata Knight Riders here at Sheikh Zayed Stadium on Sunday.
KKR defeated SRH in a thrilling Super Over encounter after both the teams failed to get over the line in their 20 overs.
SRH batted first in the Super Over. Lockie Ferguson bowled the Super Over and scalped two wickets in the first three balls of the over. His spot-on bowling helped KKR to win the low scoring Super Over.
He returned with the 3-15 in his four overs and was awarded Player of the Match.
Chasing a 164-run target, Sunrisers surprised one and all by sending Kane Williamson to open the batting alongside wicket-keeper batsman Jonny Bairstow. It was eventually learnt that Williamson was suffering from an injury which led SRH to allow him to play the hitter role in the powerplay.
Having scored 29 (19) with the help of four fours and a six, Williamson did provide Hyderabad with a solid start but was constantly seen struggling with his hamstring.
Muralitharan explained the reason behind sending Williamson in the opening.
"We decided because of his (Williamson) injury as he was finding it difficult to run twos and threes and he went out of the field so we thought it is the best opportunity because he is playing really well. He did his job but at the end of the day it was a tie match and it happens in T20 cricket. We tried hard, nothing went our way," Muralitharan said in the post-match press conference.
"Pitch is nothing because it was just 40 overs so it is the same. Pressure levels are different because when your are chasing it is hard. So, we were going really well in the powerplay and then we lost three-four wickets in 15 runs. Ferguson bowled really well and that's the one where we had problems. After that we rebuilt but in the end we can not do it," he added.
Talking about the crucial moments of the game, the bowling coach said the side missed pacer Bhuvneshwar Kumar in the game. Bhuvneshwar was ruled out of the tournament due to a hip injury.
"We missed Bhuvneshwar Kumar. So, we have good bowlers. In the bowling department, we can't find any fault or anything because they are doing a really good job. batting little bit lacks in this tournament and if we can click that definitely it will change. Still, we have a chance and it is a matter of three or four games winning and getting to the semifinals," the legendary spinner said.
SRH have six points in nine games and will lock horns against Rajasthan Royals at Zayed Cricket Stadium in Abu Dhabi on October 22. (ANI)

Hizbul terrorist surrenders during encounter with security forces in J-K

Why are you so ashamed of your parents’ photo, Ravi Shankar Prasad asks Tejashwi Yadav

Samajwadi Party announces candidates for six seats in UP assembly bypolls, RLD to contest one seat