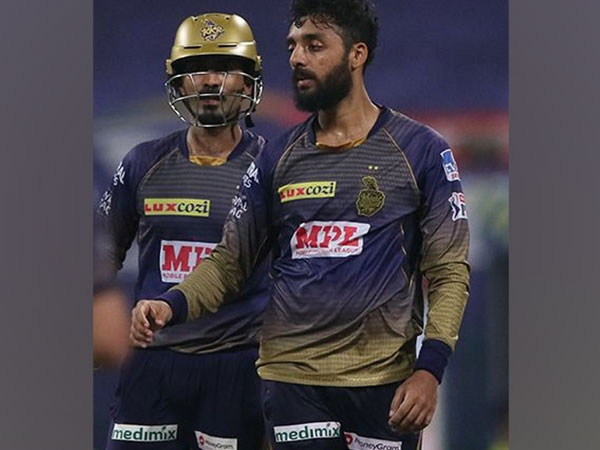 New Delhi [India], October 8 (ANI): Former Australian spin wizard Brad Hogg has praised Kolkata Knight Riders' spinner Varun Chakravarthy for his performance against Chennai Super Kings (CSK).
CSK was set a target of 168 runs and the MS Dhoni-led side found itself in a comfortable position at 99-1 in the 12th over with Shane Watson and Ambati Rayudu at the crease.
However, Ambati Rayudu was sent back to the pavilion by Kamlesh Nagarkoti, and from there on, KKR choked the runs and as a result, the Dinesh Karthik-led side won by 10 runs.
Varun Chakravarthy also got the crucial wicket of MS Dhoni and from there on, CSK was not able to get any sort of momentum. Chakravarthy had clean bowled Dhoni (11) in the 17th over of the innings.
Hogg said skipper Dinesh Karthik utilised his bowlers perfectly and added that Chakravarthy has been a revelation in this year's IPL.
"Dinesh Karthik utilized his bowlers perfectly last night. CV Varun to Dhoni gold, he has been a revelation this year. #IPL2020 #KKRvsCSK," Hogg tweeted.
While batting first, KKR was bowled out for 167. Rahul Tripathi was the only batsman who was able to leave a mark as he played a knock of 81 runs.
Tripathi came out to bat as an opener for KKR against CSK and he was able to leave a mark immediately. Earlier, the Dinesh Karthik-led side was sending Sunil Narine out as the opening batsman.
KKR is currently at the third position in the IPL standings with six points from five matches. (ANI)