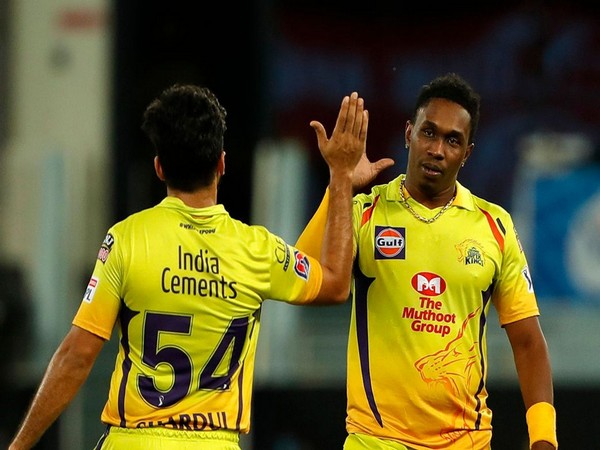 Dubai [UAE], October 14 (ANI): Chennai Super Kings (CSK) all-rounder Dwayne Bravo said that the side is trying to break the tournament into two halves and is focused on winning matches at a stretch in the second half.
CSK is currently in the sixth position in the IPL 2020 standings with six points from eight matches.
Bravo's remark came as CSK defeated SunRisers Hyderabad (SRH) by 20 runs on Tuesday at the Dubai International Stadium.
David Warner-led SunRisers Hyderabad failed to chase down the target of 168, after being restricted to 147/8. For CSK, Karn Sharma and Dwayne Bravo scalped two wickets each.
"I enjoy these moments of the game, especially the back end of it. I must give the whole credit to Shardul. His 19th over made it really easy for me. Rashid Khan can be a dangerous player to deal with. A total team effort. Defending a total of 167 is tricky, powerplay needs to be good. No panic. CSK was in this position before in 2010. We're trying to break it into a mini tournament. See how many we can win in the second half," Bravo told host broadcaster Star Sports after the conclusion of the game against SRH.
Batting first, CSK posted a total of 167/6 in the allotted twenty overs. Shane Watson top-scored for the MS Dhoni-led side with 42 runs. In the match against SRH, CSK changed its opening partnership, and sent Curran as an opener instead of Watson.
"We had a different gameplan today. Good that we tried something different and it worked. At the end of the day, both teams have to play on it and so who adapts better wins. We don't think about the track that much. I had a stint with him (Sam Curran) and his brother at Surrey. Really enjoyed playing with both of them. He has a lot of heart and character. We had a chat. Me, Sam or Jadeja weren't getting enough balls. So, why not send one of them up," said Bravo.
With the ball in hand, Curran returned with the figures of 1-18 from his three overs. He also got the crucial wicket of SRH skipper David Warner.
Ambati Rayudu and Sam Curran also got among the runs for CSK and played knocks of 41 and 31 respectively. In the end, Ravindra Jadeja played a quickfire cameo of 25 runs off just 10 balls. For SRH, Sandeep Sharma was the pick of the bowlers with figures of 2-19 from his four overs.
For the match against SRH, CSK made one change to their lineup as they brought in Piyush Chawla in place of Jagadeesan.
SRH is in fifth place in the points table while CSK is in the sixth position. CSK will next lock horns with Delhi Capitals on Saturday, October 17 at the Sharjah Cricket Stadium. (ANI)