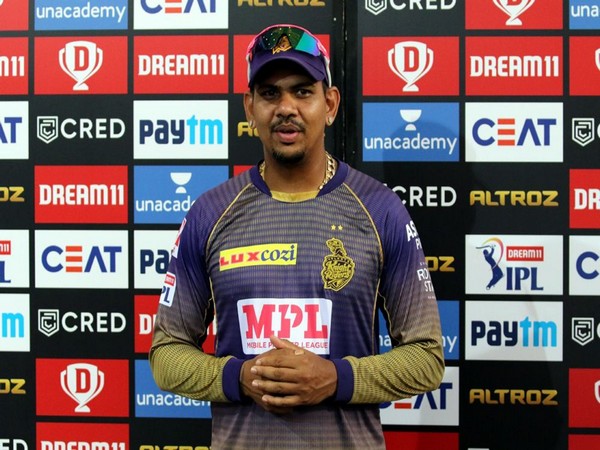 Abu Dhabi [UAE], October 11 (ANI): In what comes as a big blow for Kolkata Knight Riders, their spin spearhead Sunil Narine has been reported for bowling with a suspected illegal bowling action during his side's Indian Premier League (IPL) match against Kings XI Punjab on Saturday.
The IPL release said: "The report was made by the on-field umpires according to the IPL's Suspected Illegal Bowling Action Policy. Narine will be placed on the warning list and is permitted to continue to bowl in the tournament. Another report will result in Narine being suspended from bowling in the IPL 2020 until cleared by the BCCI Suspect Bowling Action Committee."
It was otherwise a brilliant day on the field for KKR as they came from the jaws of defeat to beat KXIP. Punjab skipper KL Rahul said he didn't have any answers for the loss.
"I have no answers. We just need to keep coming harder in the next seven games. We bowled really really well. This was a fresh strip so we didn't know what were good lines and lengths," said Rahul during the post-match presentation via host broadcaster. "And the bowlers adjusted really well. And they were brave at the death too," he added.
While chasing, KXIP collapsed from 149/2 to 158/5 in the last two overs as KKR bowlers made a comeback to clinch the final ball thriller.
"Don't think we were satisfied at any stage in the chase. You are satisfied only when you win the game. Towards the end, we kept losing wickets, and couldn't get us over the line," said Rahul.
KKR will next take on Royal Challengers Bangalore in their next game at Sharjah Cricket Stadium on Monday, October 12. (ANI)