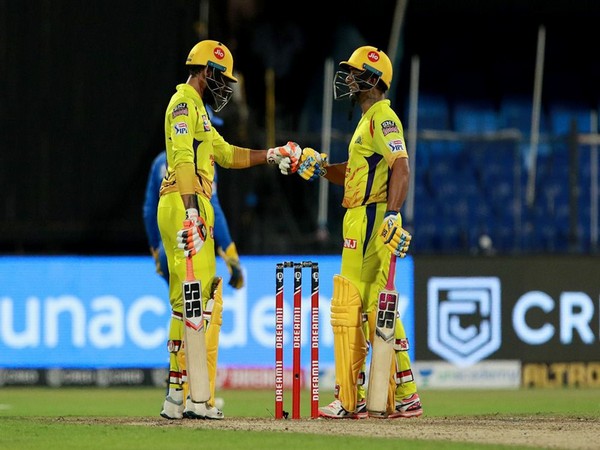 Sharjah [UAE], October 17 (ANI): Ambati Rayudu and Ravindra Jadeja's knocks powered Chennai Super Kings (CSK) to 179/4 in their 20 overs against Delhi Capitals at Sharjah Cricket Stadium here on Saturday.
Jadeja smashed 33 off 13 while Rayudu scored 45 from 25 balls including four sixes.
Opting to bat first, Sam Curran (0) failed to open his scoring and was sent back to the pavilion in the first over of the innings by Tushar Deshpande.
Shane Watson joined Faf du Plessis in the middle and stitched a solid 87-run partnership for the side. Anrich Nortje scalped the second wicket for his team as he dismissed Watson (36) in the 12th over.
Ambati Rayudu and Du Plessis had a 22-run brief stand for the third wicket before the latter was bagged by Kagiso Rabada in the 15th over. Du Plessis played a knock of 58 runs studded with two sixes and six fours.
CSK skipper MS Dhoni promoted himself up in the order but failed to have an impact on the scoreboard. Dhoni (3) was caught behind the stumps off Nortje.
Ravindra Jadeja and Rayudu accumulated 50 runs for the fifth wicket. CSK finished at 179/4 in 20 overs.
For Delhi Capitals, Nortje claimed two wickets while Rabada and Deshpande bagged one wicket each.
Brief scores: CSK 179/4 (Faf du Plessis 58, Ambati Rayudu 45, Anrich Nortje 2-44). (ANI)