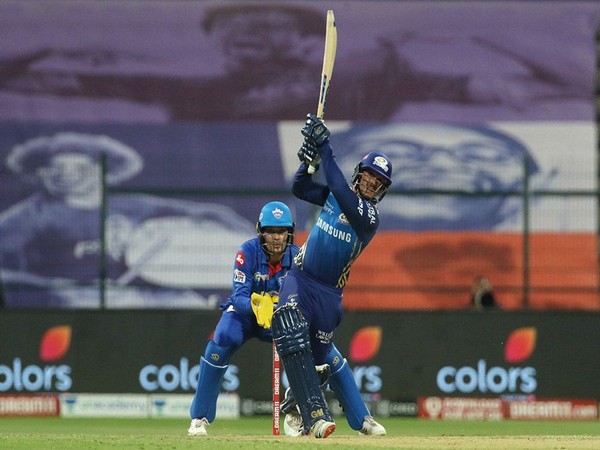 Abu Dhabi [UAE], October 11 (ANI): Quinton de Kock and Suryakumar Yadav scored their respective half-century to help Mumbai Indians secure a five-wicket win over Delhi Capitals in the Indian Premier League (IPL) here on Sunday.
Yadav and de Kock both scored 53 runs in the match as they helped their team to chase a decent target of 163 runs.
Chasing the target, de Kock and Rohit Sharma provided Mumbai Indians a good start as both struck regular boundaries. However, in the fifth over, Axar Patel got hold of Sharma (5).
Suryakumar Yadav then took the field while de Kock continued playing with an attacking mindset and completed his half-century. Soon after scoring his half-century, de Kock was sent back to the pavilion by Ravichandran Ashwin.
Ishan Kishan was the next batsman and he formed a brilliant 53-run partnership with Yadav, who also went on to score his half-century. Their partnership was brought to an end by Kagiso Rabada in the 15th over when the pacer removed Yadav (53).
The fall of wickets did not stop as in the next over, Hardik Pandya (0) was dismissed. Rabada then dismissed Kishan (28) in the 18th over. Kieron Pollard and Krunal Pandya then took the responsibility of the chase.
The match came to a point when Mumbai Indians needed seven runs off the last over. Marcus Stoinis bowled the final over and Mumbai Indians easily secured a win in the match.
Earlier, opting to bat first, Delhi had a poor start as they lost opener Prithvi Shaw (4) in the first over. Ajinkya Rahane, playing in his first game of the season, joined Shikhar Dhawan in the middle.
Rahane and Dhawan added a 23-run brief stand for the second wicket. Spinner Krunal Pandya scalped Rahane (15) as he found him in front of the wickets in the fifth over.
Skipper Shreyas Iyer and Dhawan stitched a partnership massive 85-run of the fourth wicket. Iyer was caught at deep midwicket by Trent Boult off Krunal after playing a knock of 42 runs.
Meanwhile, Dhawan scored his first fifty of the season. Marcus Stoinis scored 13 off 8 before a mix-up in running between the wickets with Dhawan sent him back to the pavilion. Dhawan remained unbeaten at 69 runs while Alex Carey smashed 14* off 9.
For Mumbai, Krunal Pandya clinched two wickets while Trent Boult scalped one wicket.
Brief scores: Mumbai Indians 166/5 (Quinton de Kock 53, Suryakumar Yadav 53, Kagiso Rabada 2-28) defeat Delhi Capitals 162/4 (Shikhar Dhawan 69*, Shreyas Iyer 42, Krunal Pandya 2-26) by five wickets. (ANI)