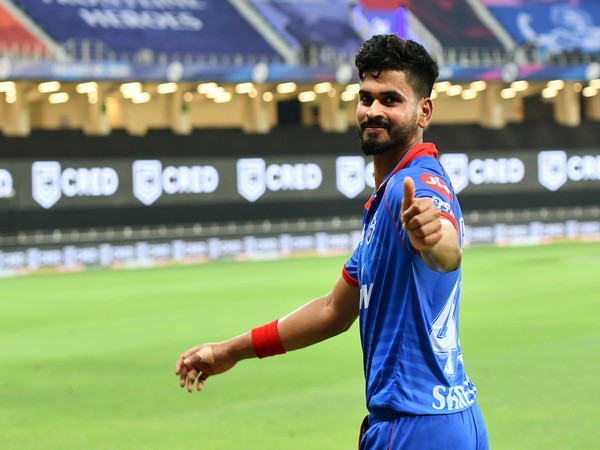 Dubai [UAE], September 26 (ANI): After a 44-run win over Chennai Super Kings (CSK), Delhi Capitals skipper Shreyas Iyer said batters batted well in the game and the way they started and finished the innings gave confidence to the side.
Put in to bat first, Delhi Capitals got off to a good start as openers Prithvi Shaw and Shikhar Dhawan put on 94 runs for the first wicket. The partnership between both batsmen saw Shaw bringing up his half-century as well.
Shaw played a knock of 64 runs off 43 balls studded with nine fours and a six while Dhawan amassed 35 off 27. Rishabh Pant played an unbeaten knock of 37* runs and skipper Iyer added 26 runs to the scoreboard.
Delhi Capitals posted a total of 175/3 in their allotted 20 overs. Delhi bowlers restricted CSK to 131/7 as Kagiso Rabada bagged three wickets while Anrich Nortje scalped two dismissals.
"I am really happy with the performance. I would give them the benefit of doubt, is tough to catch in these conditions. You misjudge the ball, really do not know how to pace yourself. In the team meeting, we decided that we are going to assess the batting conditions early and then play accordingly," Iyer told host broadcaster Star Sports after the match.
"The way the openers started gave us a lot of confidence and the finish was good too. I am lucky to have KG and Nortje in the team. It is important to stick together as a team and we need to enjoy each other's success," he added.
Shaw was awarded Player of the Match reward for his half-century. Talking about the innings, the opener said he played more grounded shots this time.
"In the start you have to see how the wicket is, playing along the ground is more important. I was striking the ball well last year as well, but I was making silly mistakes. This time I decided to play more ground shots. I would like to see the highlights of my knock and understand how it went and what I could do. The wicket was nice to bat on," Shaw said in the post-match presentation.
Delhi Capitals moved at the top spot of the points table with four points in two games. The side will now next take on SunRisers Hyderabad on Tuesday, September 29. (ANI)