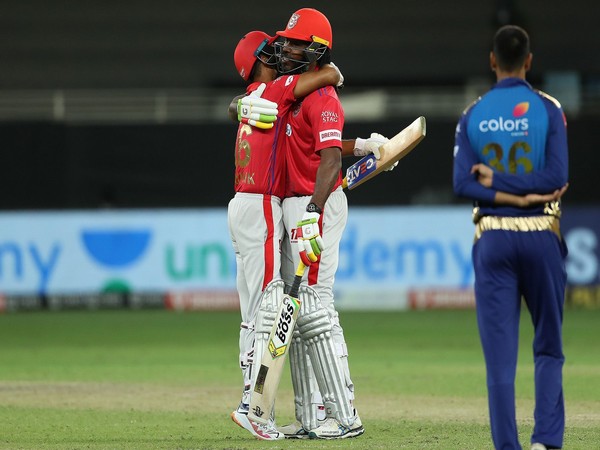 Dubai [UAE], October 19 (ANI): Kings XI Punjab (KXIP) registered an enthralling win over Mumbai Indians as their Indian Premier League (IPL) clash witnessed two Super Overs here on Sunday.
Both teams scored 176 runs in the allotted 20 overs which took the match into the Super Over. KXIP scored five runs off the Super Over, bowled by Jasprit Bumrah. However, Mohammed Shami too bowled brilliantly as he managed to restrict Mumbai Indians to five runs as well.
During the second Super Over, Mumbai Indians batted first and scored 11 runs. From KXIP, Chris Gayle and Mayank Agarwal came out to bat and easily took the side over the line on the fourth delivery.
Earlier, chasing a target of 177 runs, openers KL Rahul and Agarwal gave KXIP a decent start. Both formed a 33-run partnership before Jasprit Bumrah bowled Agarwal (11) in the fourth over.
Gayle was the next batsman and played cautiously along with Rahul. Gayle scored 24 runs from 21 balls before Rahul Chahar got hold of him in the 10th over.
Nicholas Pooran then came out to bat and started playing furiously, scoring 23 runs from the first seven balls he faced. Bumrah ended Pooran's 24-run innings in the 13th over. In the next over, Chahar dismissed Glenn Maxwell (0) which reduced KXIP to 115/4.
Whereas, Rahul continued his impressive form and went on to score his half-century. Rahul was joined by Deepak Hooda on the field. Bumrah bowled the 18th over and handed Mumbai Indians with the much-needed breakthrough of Rahul (77).
KXIP needed 22 runs from the final two over with Hooda and Chris Jordan on the field. Both the players played well and took the team to 176/6 which dragged the match into the Super over.
During the Mumbai Indians' innings, Kieron Pollard and Nathan Coulter-Nile's late quickfire knocks powered the team to 176/6 in their 20 overs against KXIP. After opting to bat first, Mumbai had the worst possible start as they lost two wickets early. Rohit Sharma (9) and Suryakumar Yadav (0) failed to score big runs on the scoreboard. Arshdeep scalped Rohit while Mohammed Shami claimed Yadav.
Ishan Kishan joined Quinton de Kock in the middle but failed to get going. Kishan (7) was removed by Arshdeep in the sixth over.
Krunal Pandya and De Kock played cautiously and stitched a 58-run partnership for the fourth wicket before the former was dismissed by Ravi Bishnoi in the 14th over. Krunal played a knock of 34 runs. Hardik Pandya scored eight off four balls but failed to get going as he was scalped by Shami in the 16th over.
Meanwhile, De Kock completed his fourth half-century of the season. Chris Jordan got rid of De Kock in the 17th over. He accumulated 53 runs including three sixes and as many fours.
Kieron Pollard and Nathan Coulter-Nile's late onslaught added 54-run in the last three over. The duo added a 57-run partnership for the seventh wicket. Pollard scored 34 off 12 while Coulter-Nile remained unbeaten on 24.
For Punjab, Mohammed Shami and Arshdeep Singh bagged two wickets each.
Brief scores: Mumbai Indians 176/6 (Quinton de Kock 53, Kieron Pollard 34*, Mohammed Shami 2-30); KXIP 176/6 (KL Rahul 77, Nicholas Pooran 24, Jasprit Bumrah 3-24). Super Over: KXIP 15/0 (Mayank Agarwal 8*, Chris Gayle 7*) defeat Mumbai Indians 11/1 (Kieron Pollard 8*, Hardik Pandya 1). (ANI)

Garth Brooks, Trisha Yearwood cover ‘Shallow’ from ‘A Star Is Born’ for his upcoming album, ‘Fun’