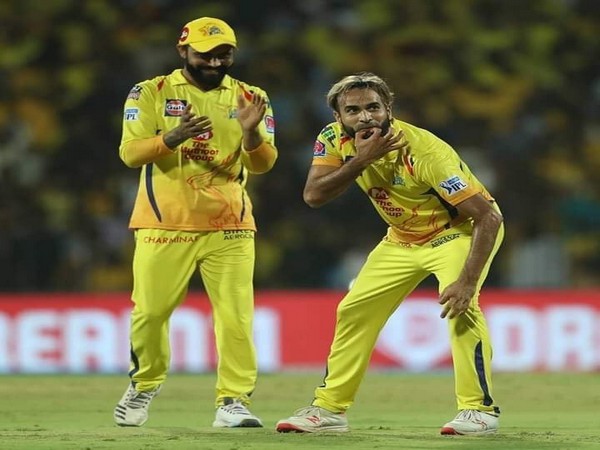 Dubai [UAE], October 22 (ANI): South African star spinner Imran Tahir has said that it was very painful to see compatriot and former Proteas skipper Faf du Plessis carry drinks for the Chennai Super Kings (CSK) in the Indian Premier League.
Tahir also heaped praise on how good CSK is as a franchise. The leg spinner said that the franchise and the Chennai fans give the utmost respect to their players.
The South African spinner has not played a single game for CSK this season and there has been serious speculation as to when the Proteas spinner will be seen in action in the ongoing IPL.
"Best team, from my heart is Chennai. I've been all over the world. I've never seen so much respect given from a franchise. I've never seen someone look after my family so well, the fans in Chennai are unbelievably lovely," Tahir told Indian spinner Ravichandran Ashwin in his YouTube show 'Hello Dubaiahh.'
"When I play there it was a different atmosphere. And the main reason is I love their culture. They don't talk about performances and are always supportive and that's is what I like about it as in cricket You'll perform one day, and not on another," he added.
Tahir said that he has got "no clue" as to when he would play and asserted that it is quite difficult for a player to get into the CSK squad when four overseas players have already cemented their name.
"I have no clue. Earlier, Faf Du Plessis had to carry drinks the whole season. It was quite painful. He's got a brilliant T20 average. I'm doing that this year. I actually got an idea of how he felt. I have been talking to him as well," Tahir said.
With four games remaining for Chennai Super Kings (CSK) in the 13th edition of the Indian Premier League (IPL), the MS Dhoni-led unit would ideally look to finish on a high.
With Bravo ruled out, CSK is likely to finally bring last year's purple cap, Imran Tahir, into the playing XI for the remaining four games.
"And once four overseas players are settled in CSK then it's hard for the fifth guy. I hope I get a game," said Tahir. (ANI)